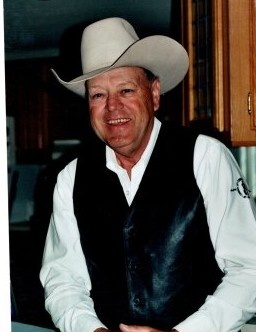 Chet was born in Jackson Hole to Clark and Georgene Wheeldon on December 31, 1946; his mother called him their last-minute tax deduction. As a kid, Chet really walked a mile, every day, to and from the school bus stop, uphill, in the snow, once in a while carrying his sister on his back the whole way home. Chet graduated from Jackson Hole High school in 1966. He was a competitive athlete in football and track. However, Chet had a love for another sport; he started rodeoing from around the age of 5. Sometimes he would earn more money than the cowboys at the Wilson rodeo who would pay him $1 to ride the calves. Chet was an accomplished saddle bronc rider and bareback rider, and PRCA member. Throughout his life, Chet enjoyed sharing his passion and knowledge for the sport with his own family and any young cowboy looking for advice.

Chet met his wife, Karen Elizabeth Smith, in the Cowboy bar. Chet said she was so quiet, he had to go through her friends to get to her. After dancing the nights away, the two tied the knot on March 15, 1973.

Chet was a saddle maker and made his living creating high-quality western and pack-saddles, tack, and gun scabbards. Other saddle makers complimented Chet for his sewing machine work for being so meticulous. Chet retired from the town of Jackson Hole and went back to saddle work at the age of sixty.

Chet used to say, “If a kid ain’t ornery, he ain’t worth having," and Chet was no exception. When Chet was 6, his uncle, Jack Robertson, took him to Jackson Drug and asked him what he wanted. Chet chose a cigar. He tacked his brother’s coattails to the roof (brother attached), and even shot his 50-year-old mother with a BB gun!

Chet Wheeldon was a friend to many. Every nephew, niece, and sons’ friends who met him loved his kind encouragement and playfulness. When riding shotgun with Chet around town, you couldn’t go anywhere where you didn’t bump into someone who he hadn’t befriended.

Chet Wheeldon is survived by his wife: Karen; his two sons and their wives: Shawn and Salina, and Jason and Trina; his sister, Freddy, his brother, Chancy; and his grandchildren, Tarrin and Dezaray.

A graveside service will be held at Southpark Cemetery at 1 PM, Thursday, March 18.

To order memorial trees or send flowers to the family in memory of Chet Wheeldon, please visit our flower store.