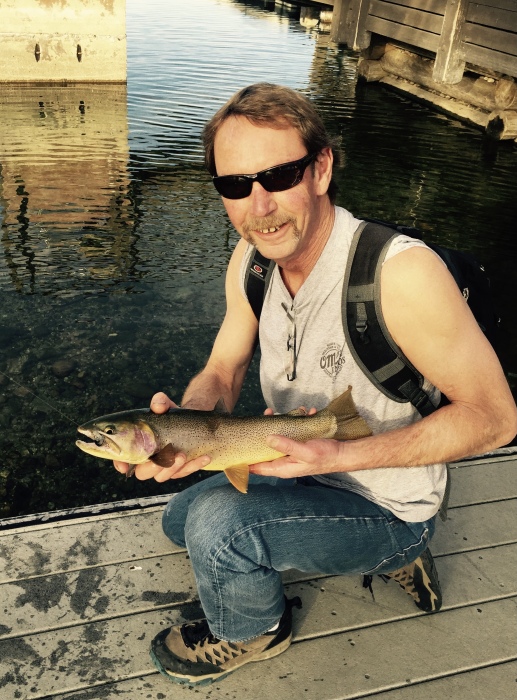 David Alan Hoelsch, 58, of Jackson, Wyoming, passed away unexpectedly on January 23, 2022. He was born on November 9, 1963, in Phoenix, Arizona. Dave grew up in Scottsdale, attended Pima Elementary School and graduated from Scottsdale High School in 1981, where he lettered in Track. With his lithe build, he held the high jump state record for a number of years and was on the Scottsdale Community College track team.

In the mid 1980s, Dave moved to Lafayette, Louisiana, where he learned to play the guitar from a cousin. He returned to Arizona a few years later and worked at a Scottsdale Mobil station where he discovered he was talented in tinkering under the hood of vehicles.

Tired of city life, Dave moved to Wyoming in 1990 to work at the Grand Teton Lodge Co. in Grand Teton National Park. He managed the Colter Bay Service Station and was proud of their “cleanest restrooms on the planet.” Dave lived in the dorms there for a year, then lived in a trailer, where he was the youngest in the trailer park. Many music jams were held in the evenings at his firepit. Dave’s love of music grew, and he taught himself to play the banjo and harmonica. As an avid outdoorsman, he was happiest when he could fish, canoe and hike in GTNP, and, as a true explorer, he wandered the woods, sometimes on a quad or in his Suburban. Dave was an expert marksman, in archery and firearms.

Dave worked for Auto & Diesel Services for about 20 years and was known as “Diesel Dave” in Jackson. Most recently, he worked for Shervin’s Independent Oil after Auto & Diesel sold. Dave cared deeply about all his customers and did his best to get them back on the road quickly. He was a hard worker, a true gentleman and an old soul.

Dave grew up loving animals. He had multiple dogs and cats over the years:  Juneau, a malamute, was his mom’s favorite and she aptly named him Junebug. Next came Mujiburi, an injured, found white shepherd, then Kodiak, a red husky. From 2005 to 2019, Baron Von Hoelsch, a devoted and gentle German Shepherd, was his constant companion.

Although Dave never had any children of his own, he was “Uncle Dave” to many of his friends’ kids, in addition to his own niece and three nephews. He adored them all, sharing his hobbies, stories of his life’s adventures, always laughing and joking with them.

Dave was preceded in death by his parents, Alan Charles Hoelsch and Clarine Frances (Denney) Hoelsch, as well as his younger brother, Michael Edward Hoelsch. He is survived by his sister, Alison Lynn Meyer (Jeff), of Scottsdale, Arizona; niece Lindsay Feldberg (Aaron); and nephews Austin Meyer, Phil Meyer and Zachary Meyer. He is also survived by his first cousins, whom he was very close with, as well as a bevy of loyal and truly treasured Jackson friends.

An outdoor celebration of life will be planned for the spring in Jackson with plenty of Johnny Cash being played.

To order memorial trees or send flowers to the family in memory of David Hoelsch, please visit our flower store.