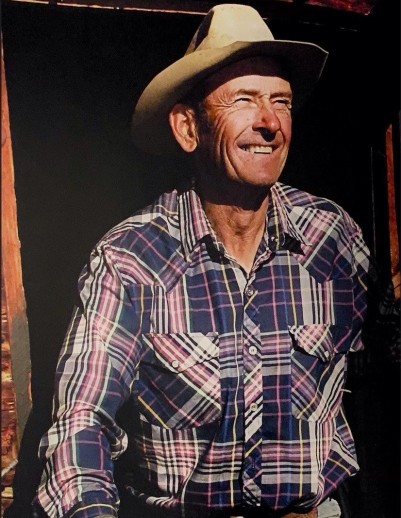 Glenn Bruce Taylor was born on July 28, 1934 to Verland Taylor and Joella (Eynon) Taylor. After his birth in Blackfoot, Idaho – where Joella’s parents were living, the family, which included an older brother Joe, returned home to Jackson Hole, Wyoming. The family would later welcome two girls, Deon (Robinson) and Jane (Budge).

Glenn’s childhood involved many moves as his father took work wherever he could find it. Some notable summer stops landed the family at Grassy Lake near Yellowstone, Black Rock, and the Goosewing Ranger Station. Winters were spent at various ranches around the Jackson Hole Valley feeding cattle. Eventually, the family settled in the Gros Ventre near Lower Slide Lake. Even in his younger years, Glenn spent a substantial amount of time in the saddle and worked and adventured throughout the valley. He quickly learned to be independent and self-sufficient. During a stint living on the Elk Ranch, Glenn and his brother drove a team of horses and a sleigh to school at the Moose Head Ranch – it was quite a distance for two boys in the 2nd and 4th grades.  He was always proud to say that he was able to buy his first cow when he was thirteen. He collected Coke bottles and eventually saved up $165 to make the purchase. These stories, a few of many from Glenn’s childhood, paint a picture of a boy that was destined to be hard working, independent, and up for any challenge in his adult years.

After graduating Jackson-Wilson high school, Glenn attended the University of Wyoming on a full scholarship and then returned home to the family. After returning home, Glenn began dating Marian DiStefano. After a whirlwind courtship, Glenn and Marian married on June 25, 1960. That summer, Glenn and Marian leased property at the Red Rock Ranch to put up hay for the cattle. In 1961, Glenn and Marian purchased property on the shore of Lower Slide Lake – adjoining the previous family property, purchased in 1944, that belonged to Glenn’s parents. Glenn and Marian had four children, Bruce (1961), Brian (1962), Linda (1966), and Laura (1967).  The family made ends-meet in any way possible – ranching, cutting timber, stacking and hauling hay by hand, selling milk, outfitting and doing anything else that would keep the bills paid. Despite the constant workload of the family ranch, Glenn and Marian always made time to follow their children in their pursuits. Glenn was especially fond of wrestling and traveled to the state wrestling meet for decades.

The ranching operation that Glenn had in the Gros Ventre was a family affair – with anyone and everyone enlisted to help. Between raking hay, herding cattle, changing sprinkler pipe, and repairing equipment, there were few idle moments. During the winter months, Glenn fed the family’s cattle with a team of horses, a task that Glenn always enjoyed; even when temperatures at the ranch reached well below zero. With the cow/calf operation in the Gros Ventre, Glenn spent many nights in the barn assisting in births and helping mother cows and calves whenever needed. During the summer months, Glenn rode his range permits – in Redmond Creek, Bierer’s Creek, Ditch Creek and Miner Creek well into his 80s. This aspect of his life was a true passion, and sleep and rest were always an afterthought compared to the needs of his livestock and the duties on the ranch. For his accomplishments in ranching and cowboying, Glenn was on the Wyoming Livestock Board and was inducted into the Wyoming Cowboy Hall of Fame in 2021.

Another passion that helped keep the proverbial wolf from the door, was the family’s outfitting business, Gros Ventre Wilderness Outfitters. After Verland’s retirement, Glenn and Marian took on his outfitting business and guided countless clients into the Gros Ventre Wilderness. Glenn was a hard-working and successful guide for elk, mule deer, bighorn sheep, moose, and black bears. Many of his client’s trophies won annual awards through the Wyoming Outfitters and Guides Association, where he became an honorary lifetime member in 2020. This profession led Glenn to every corner of the Wilderness where his adventures with clients were shared with Marian, who served as the camp cook. If you throw a dart on the map in the Gros Ventre, it was likely that Glenn could tell you a hunting story about that area. Glenn persevered guiding in the early pre-dawn hours to the hours well after dark until he was 79 years old. Although he stopped guiding, the outfitting business remains in the family and Glenn remained involved in a limited capacity.

Following this retirement from guiding, Glenn did not simply slow down – he would often say, “I’m not a quitter”.  He continued ranching/cowboying and spoiling his coveted 4-H steers (which won many awards at the Teton County Fair) until his last days. There was, after all, always work to be done. In 2016, Glenn lost his beloved Marian. He kept her memory alive with pictures of the couple across her piano and throughout the house. Her voice still greets the recipients of the voicemail machine on Glenn’s ranch phone. Their companionship was something he referenced before and during many family meetings and meals.

In his last few months, Glenn kept his list of chores long and his idle time short. As friends and family came and went from the ranch house on Slide Lake, he would often say “I’m not going anywhere” as they left the door. He has now gone to be with Marian again.

We will miss you dad, grandpa, and great grandpa. We will do our best to keep your legacy alive in the Gros Ventre.

A memorial service will be held on February 5th at 1 p.m. at the Presbyterian Church of Jackson Hole. The event will be live streamed for those who cannot attend in person.
Access to livestream is by going to be the Presbyterian Church of Jackson Hole's YouTube channel: www.YouTube.COM (Type PCJH in the search box and then click on the live stream once it begins at 1:00pm Sat.).

In lieu of flowers, donations can be sent to the Senior Center of Jackson Hole.

To order memorial trees or send flowers to the family in memory of Glenn Taylor, please visit our flower store.