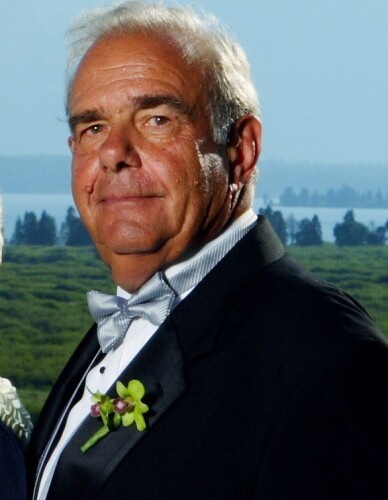 Robert Alan Hammond died peacefully November 6th at home with family at his bedside. He was 87.

Bob was born in 1934 in Elizabeth, NJ and attended elementary school in Ho-Ho-Kus, NJ before the family moved to Ridgewood, NJ where he graduated from Ridgewood High School in 1952.  Like his father who was raised in Brooklyn, both men were Brooklyn Dodger fans. He attended Lehigh University in PA as an engineering student before transferring to Mitchell College in CT, where he played basketball and graduated with a Bachelors in Business in 1956.

The summer after college Bob was drafted into the U.S. Army, starting out at Fort Dicks, NY and then to Fort Carson, CO for basic training. He served 2 years in an anti-aircraft unit as an armorer on the Neckar River in Stuttgart, Germany. He loved to tell stories of driving the Autobahn during that time when speaking of his love of automobiles. A recent visit to the National Museum of Military Vehicles in Dubois was especially enjoyed as he was talking about 50 caliber machine guns like it was yesterday.

Upon returning to the States, Bob worked in Sales at American Airlines at Rockefeller Center in New York City where in 1963 he met and married his wife of 50 years. As a regional airline sales manager, he was transferred from NY to Detroit, MI in 1965, then in 1978 to Providence, RI.  When he retired from American Airlines after 33 years, then Providence Mayor Buddy Cianci gave Bob the “keys to the city” in Providence, RI “for being a dedicated member of the community as demonstrated by his active participation as a promotor and sponsor of the RI Special Olympics, Multiple Sclerosis Society, Save The Bay, and many others.” Mayor Cianci had “declared 7 Oct 1991 Robert Hammond Day as he dons his cowboy hat and rides into the sunrise of his retirement.”

Bob and Dorry followed their children west and relocated to Jackson, WY where they became the proprietors of Sacred Trails Plains Indian Art Gallery on King Street for the next decade. Bob lived in Jackson Hole, WY for 30 years serving as a dedicated community volunteer for Howdy Partners, Jackson Hole Chamber of Commerce, Teton County Emergency Medical Services, Jackson Hole & Greater Yellowstone Interagency Visitor Center. He just loved talking to tourists, and had a wicked sense of humor. He was jovial, had a kind heart and always lit up a room. He was a proud member of the Veterans of Foreign Wars and the American Legion Post 43.

Bob was preceded in death by his parents, parents Robert William Hammond and Elsie Bertha Herwig, and his wife Dorothy Wiltsie Lapham Hammond. The family would like to thank St Johns Hospice staff and Elder Care Associates for their loving care during Bob’s final years and moments. In lieu of flowers the family asks that contributions be considered in his memory to St. Johns Health Hospice Foundation in gratitude for the exceptional years of care he received. A family graveside service was held at Aspen Hill Cemetery with Military Honors.

To order memorial trees or send flowers to the family in memory of Robert Hammond, please visit our flower store.