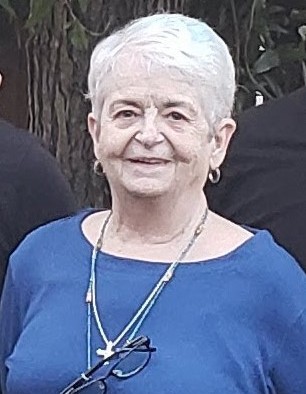 Vicki Jaye Johnson, with her palms raised to the Lord and her heart looking down at those she loved, passed away on March 1st, 2022 at her home in Jackson, Wyoming.  Vicki was born on August 19th, 1945 to the late Walter and Bonnea Smith (Adams) in Scottsbluff, Nebraska.  It was the neighboring town of Gering where she was raised along with her younger brother Mike and younger sister Cindy until her graduation from Gering High School in 1963.  After living in Lincoln, Nebraska and Denver, Colorado for a brief time Vicki moved to Jackson, Wyoming in October of 1977, although she had been living and working in the valley part time since 1966.  It was in Jackson where she raised her three sons and later two step-sons.  When not running around the town of Jackson taking her boys to their numerous social, academic and athletic activities - an accomplishment she was never fully reimbursed properly for - she spent her time working at Sirk Shirts, St. John’s Episcopal Church and Valley Mortuary.  She was active in her community as a member of the Jaycees, a volunteer at the Senior Center where she enjoyed helping with meals and announcing for Bingo night (definitely one of her favorite things to do), and within her church family at St. John’s Church.  It is at St. John’s where she met her current husband Dennis Johnson in 1985, and built a solid foundation of friends, faith and love for those around her that served her spirit and fulfilled her life through her final days.  Vicki loved reading, spending time with her family, praying for those in need, talking to her friends around the valley, going to movies with her husband, sending out mass numbers of Facebook posts, getting a section of her hair dyed blue (in her words, “it’s my trademark”) and eating sweets whenever possible - even when we all shook our heads at her.  Vicki is survived by her husband Dennis Johnson, her five boys, Dylan Hollingsworth (Sarah), Shane Hollingsworth (Susan), Dustin Hollingsworth (Siobhan), Seth Johnson (Robyn), and Nathan Johnson (Claire), her brother Michael Smith (Rita) and sister Cindy Windfield (Tom), and her ex-husband Rick Hollingsworth.  She was also the PROUDEST grandmother of seven grandsons and three granddaughters and the great grandmother of two.  She was always willing to brag about her ever expanding family and talk about them to all who were willing to listen, and even those who weren’t.  You will forever be missed and never forgotten as a wife, mother, sister, grandmother and friend. A celebration of life will be held on Friday, May 13th at St. John’s Episcopal Church in Jackson. In lieu of flowers, Vicki requested that donations be made to St. John’s Episcopal Church Outreach at https://www.stjohnsjackson.org/ways-to-give or to the Daughters of the King General Fund at https://www.doknational.org/donations please include Vicki Johnson in the memo or comment boxes.

Condolences may be sent to the family www.valleymortuaryjackson.com

To order memorial trees or send flowers to the family in memory of Vicki Johnson, please visit our flower store.