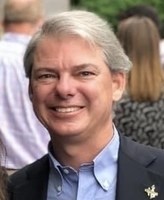 
After finishing school, he started out his career in Miami, Florida. In 1994, he moved to Atlanta, GA, where he spent 27 years raising his family and working as a successful transactional tax attorney with a focus on the energy industry. For the past ten years, he has served as a partner at Barnes and Thornburg, where he was co-chair of the Renewable Energy Group.
Over the past ten years, he spent most of his time out in Jackson, Wyoming where he pursued his love for the outdoors. Our Buffalo Bill was an avid outdoorsman and could be found skiing, hiking, biking and climbing in the Teton mountain range during his free time. He wasn't one to sit still and set an example of giving 200% of everything he did. He would be the only one still smiling at the end of a long day on the trail. There was never too hard a pitch for our Bill to get up. His determination and passion for the challenge and the outdoors was infectious. Many shared in the joys of his adventures through his carefully crafted narratives of his allegedly harrowing journeys. He wrote letters, stories and more just to see the joy it gathered from those he loved. He frequently checked in on those he loved, and there was no stranger to his thoughtfulness, loyalty, and generosity.


His biggest pride were his three children and the experiences he got to have with them in the mountains. Over the past three years the kids tried to keep up with their father as he charged up mountains. When not in the mountains, he was up for endless card games, long bedtime stories, and a night cap with his kids. He shared his passions with his children, who will never forget the many special memories they shared with their father.


He is survived first and foremost by his wife of 28 years, Alicia. He will be dearly missed by his three children, Adeline, Becker, and Mary Alice. He is also survived by his sister, Catherine Ewing, and beloved uncles, Jon and Mike Ewing. He was preceded in death by his mother, Patricia Peeler Ewing, and his father Frank Coulter Ewing.
In lieu of flowers, a memorial donation can be made to City Kids at https://secure.givelively.org/donate/city-kids-to-wilderness-project-inc

To order memorial trees or send flowers to the family in memory of William Ewing, please visit our flower store.