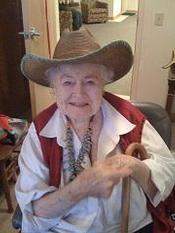 Betty Ellen Graham was born to Kent and Maude Graham in Fremont, Nebraska on May 4, 1922 at 11:25pm, weighing in at 8 pounds even. The family lived in Nebraska, Colorado, and Missouri, before finally settling in Cheyenne, where Betty graduated from high school in 1940. She began college at the University of Colorado at Boulder but left Colorado for Washington, D.C. to help the war effort. She worked in Military Intelligence for the Department of War before returning to Colorado where she assisted with the design and installation of the first radar on a military aircraft.

Betty married John "Jack" Conley, the Fire Chief at Lowry Air Force Base, and their first child, Russell Wallace Conley, was born on May 12, 1949. They moved to Cheyenne in 1950 and were stationed at F.E. Warren Air Force Base, where Jack worked as Fire Chief. Their second child, Patricia "Patty" Sharon Conley was born on September 14, 1950.

Betty and Jack fell in love with the Tetons and moved to Jackson Hole in 1952, purchasing Medsker's Cabins in Kelly. After Betty and Jack divorced, Betty married Claude Wham, who owned "Claude's Place," now known as the Gros Ventre River Ranch. Betty and Claude ran outfitting and hunting trips and also handled the day-to-day affairs for their ranch. They divorced in 1954, and Betty moved with Russell and Patty to Jackson. They lived in the historic Jackson Clubhouse, where Betty worked as a waitress at the lunch counter and also in the bakery.

In 1956, Betty married Robert "Bob" Parks in Denver, and they spent the winter there. Betty and Bob returned to Kelly in 1957, living in the Gatehouse on the Teton Valley Ranch. Betty's third child, Millie "Bug" Frances Parks, was born on November 28, 1957. After Bug was born, the family moved to Jackson so that they would have running water and electricity. In Jackson, they lived behind Teton Laundry, where Betty worked, while Bob worked for Wyoming Game & Fish. The family moved to the old Baptist Rectory across from St. John's Hospital. Betty and Bob divorced in the early 1960s.

To support her three children, she briefly ran the restaurant in the Stagecoach Bar in Wilson, where Bug slept under the counter. Betty then ran the lunch counter at the bottom of Snow King in the winters and the snack bar at the top of Snow King in the summers. She also worked for the Post Office, and she began delivering the Denver Post newspapers on her lunch break.

In 1961, Betty expanded her delivery of the Denver Post throughout Jackson (year-round) and in Grand Teton and Yellowstone National Parks in the summer months. She delivered papers for over 27 years, driving over 1.5 million miles. In the summer of 1988, Betty continued to deliver papers into Yellowstone to Old Faithful Inn, even after fire restrictions prohibited visitors from entering the Park. At the request of the Park Service, Betty delivered the Denver Post to the firefighters daily throughout the summer.

In the mid-1960s, Betty finally had the opportunity to establish her own business. In 1965, with the assistance of friends Representative Clarene Law and Senator Cliff Hanson, Betty acquired financing through an SBA loan and built the Gros Ventre Slide In in Kelly. The Slide In became a popular stop for bikers, hunters, campers, locals, and tourists offering a lunch counter, general store, gas, beer, and fine Native American arts. With the help of her children, Betty was able to run the Slide In and continue with her newspaper distributorship. In 1975, Callum Mackay and Clay Hoyt constructed Betty's dream log home on her Kelly property. Betty lived there and ran the Slide In until October 2001.

Betty loved to travel. She took all three of her children to Mexico and took her first overseas trip in 1985, when she went with an American tour group to China and Hong Kong. She continued her travels in the mid-1980s when she visited our sister city, Lienz, Austria with a group of local friends and businessmen. Betty returned to Europe in the late-1980s, exploring most of the Western European countries.

She also traveled extensively in her camper and motorhome, taking her grandchildren on numerous trips around Wyoming and the western United States. Betty traveled to Alaska twice, driving the Alcan highway and fishing for halibut and salmon out of Homer.

Her love of flyfishing began at an early age when her father took the family on fishing and camping trips into the Colorado Rockies. She was also an avid hunter, continuing into her 80s. She hunted elk, harvesting 42 elk in her lifetime. She also hunted antelope and moose.

For over three decades, Betty served as a volunteer for the American Red Cross. She trained firefighters, EMTs, park rangers, and climbing guides in CPR and First Aid. She also ran a Red Cross first-aid station out of the Slide In. During this time, she also served as a state-certified EMT and first responder. She was one of the founding members of the Teton County Jeep Patrol, one of the original search and rescue organizations in the valley. She was a member of the Civil Air Patrol, riding as a spotter with pilot Virginia Huidekoper.

Betty was self-taught artist who was a painting instructor for students throughout Teton County. After she retired, she had time to paint, fulfilling a life-long desire.

Betty moved to an assisted living facility in Idaho Falls, Idaho in 2001, but was able to return home to Jackson with the opening of River Rock Lodge in 2004 as its first resident. After she returned to Jackson, Betty spent time visiting her family and friends, painting, and playing her favorite game - pinochle.

A Celebration of Life is scheduled for Saturday, January 12, 2013 at 1p.m. at the National Museum of Wildlife Arts just north of Jackson. In lieu of flowers, donations can be made to the Wyoming K9 Search and Rescue or American Red Cross Bridger Teton Branch.

To order memorial trees or send flowers to the family in memory of Betty Parks, please visit our flower store.