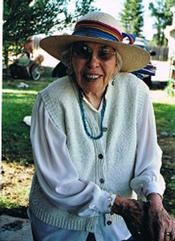 Celia Mary Drevlo, age 91, of Jackson, Wyoming was set free and sent to heaven on Friday, May 03, 2013 at the St. John's Living Center in Jackson.

Celia was born July 11, 1921 in Lordsburg, New Mexico. She spent most of her life in Fontana, California before moving to Wyoming in 2004 where she lived in both Casper and Jackson.

She had been a member of the Daughters of the King Alter Guild at the St. Luke's Episcopal Church in Fontana. She was very proud of the fact that she was a Machinist during World War II in Alamogordo, New Mexico. She had been a member of the Cactus and Succulent Society. She was very creative and artistic in her cake decorating, painting, pottery, sewing and gardening. She also wrote poetry. Most importantly, she loved the Lord Jesus Christ and her family.

She is preceded in death by her husband Clifford who died in 1987 and her brother Andres Lucero.

A Celebration Gathering will be held at a later date.

To order memorial trees or send flowers to the family in memory of Celia Drevlo, please visit our flower store.