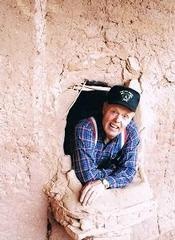 On June 16th, 2013, Father's Day, Charles Richard May got the gift that he had been waiting for. After battling cancer for a decade, he passed away at St. Johns Hospital, his family and friends being able to say their farewells. He was born September 12, 1937 to Lester Ira May and Melba Lucile Moulton May at St. Johns Hospital in Jackson, Wyoming. His grandmother, Hadden, insisted on the nickname Dick. He was the fourth of five children, all born within five years. The family lived on Mormon Row, surrounded by the homesteaders that made up the small community near Kelly. One can say that the family tree looks more like a flag pole, with Mays and Moultons marrying each other. Dick went to the tiny Grovont school with siblings and cousins. His older brother, Lanny, would ride the horse and pull the four other kids on a toboggan. When Dick was in sixth grade, the kids went to the Zenith school. In high school Dick skied and won the first cross country ski race held in Jackson Hole. He competed in both downhill and cross country and skied cross country in Junior Nationals. Dick graduated high school in 1956 and was given a suitcase as a present. With this hint, he left home and tried his hand at college in Logan, Utah for a short time. He liked to tell people that he was drafted, but really he joined the Army in 1958 and was stationed at Fort Belvoir, Virginia . When asked if he had any special skills, he said "welding", thinking it would be more interesting than marching. He spent two summers stationed in Tuto, Greenland with the Polar Research and Development Center. Building Camp Century, an under ice installation during the cold war certainly was more interesting than marching. He was discharged in 1960 and remained in the Reserves until 1964. After his military service, Dick returned home and spent several years working on road jobs all over Wyoming and Montana. He loved operating heavy equipment and worked for Studer Construction, MacGregor Triangle, and other companies. He often told stories of pioneering cuts on Teton Pass, and never drove over the Pass without asking "Have I ever told you about building this road?" Although his female relatives had spent years trying to marry him off, it wasn't until the summer of 1965 that Dick spotted a pretty woman who needed "saving from a bunch of cowboys" at what we will call an establishment that provided refreshments and dancing. He courted Elaine with flowers stolen from someone's yard and a few months later, on October 16, they were married in his parent's house on Pearl Street. Dick went from being a 28 year old carefree bachelor to a husband and stepfather to three beautiful daughters, Michele, Lori and Robin. A son, Dean, was born the fall of 1966 and eventually another daughter, Patty, joined the family in 1970. Family responsibilities made it more impractical to travel with road jobs and Dick looked for work closer to home. Along with other jobs, he worked for George Fleming at the Jackson Hole Ski Area, doing whatever needed doing. In 1973, Dick and Elaine decided to take a risk and start their own welding shop in Wilson. Lots of hard work and sacrifice followed, but Dick May Welding became a success. In the late 1990's, son Dean joined his dad welding in the shop and then Patty took over the bookkeeping, with son in law, Rex, eventually joining the family business. Dick enjoyed working more than just about anything. Dick was a member of the Church of Jesus Christ of Latter-Day Saints. His youth was spent at the small church house on Mormon Row, where every community event involved either the school or the church. As an adult, he served faithfully in various church positions until the end of his life. He did see quite a bit of the world for a poor kid from the sticks. Trips with Elaine to Alaska, Russia, South America, Antarctica, South Africa, New Zealand and Australia fed his natural curiosity. Dick and Elaine loved to just drive the back roads and pass through nearby small towns. Mostly they loved spending time with each other. Dick was diagnosed with cancer at the age of 65. It was aggressive and had been spreading long before its discovery. He did everything in his power and spent the last 10 years of his life working and enjoying his family. Blessed with many grandchildren and great grandchildren, Dick especially enjoyed the opportunity to spend time with the latest grand kids that lived right on the premises. He never imagined babysitting and changing diapers at age 70, but like every other challenge, he worked hard. People often saw Dick driving his front end loader with at least one grand kid in the special built seat next to him. Dick is survived by his wife, daughter Michele (Bob) Hiatt of Idaho Falls, Idaho, daughter Lori (Don) Weaver of Meridian, Idaho, daughter Robin (Jim) Jackson of Boise, Idaho, son Dean (Nok) May of Wilson and daughter Patty (Rex) Byington of Wilson and Ririe, Idaho, along with 15 grandchildsand 17 great grandchildren. He is preceded in death by his parents, brother Lanny and brother in law, Louie Bush. Dick's older sister, Mary Linnell of Sandy,Utah, also passed away on June 16th, just hours before him. The family would like to thank the doctors and medical staff that have helped Dick in the last years. He truly loved the "girls" in Oncology. Thanks also to those that responded Sunday morning to the house. We can never repay you for giving us time to say goodbye.

To order memorial trees or send flowers to the family in memory of Charles May, please visit our flower store.