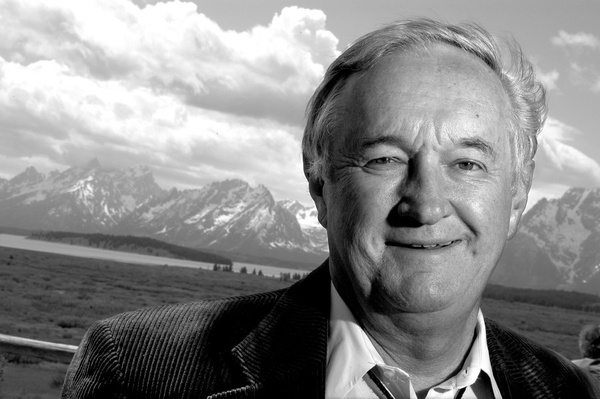 Clayton James, 75, of Jackson passed away at home on October 27th. Valley icon, consummate host, devoted husband, proud father and grandfather, a humble good man who made a difference for the better every day of his life — these are just a few of the accolades pouring into the James family about Clay.

While legions of people knew Clay and his good works in Jackson and for the Grand Teton Lodge Company, few knew that the Eagle Scout had worked as a lifeguard, a Jackson Lake Lodge room service waiter to President John F. Kennedy, a Marine Corps Reservist, a scuba diver and a water skier. As a talented young hotelier he was recognized by RockResorts owner Laurance S. Rockefeller as someone who was destined for great things, and he was hired to open many of the new RockResorts properties around the country. Toward the end of his life Rockefeller again turned to Clay and entrusted him with managing the transition of his beloved JY ranch to become a part of Grand Teton National Park. There was no better man for this job or any other than the incomparable Clay James.

Clay’s career spanned 40-plus years and took him and later his family along with him to states from the East Coast to the West Coast, to the mountains and to the Virgin Islands, Puerto Rico and Hawaii. But it was Grand Teton National Park and Jackson Hole where Clay spent most of his adult career.

Clay was born in St. Louis on Nov. 4, 1939, to John Rex James and Jeanne Marie Wallace James. He graduated from Arizona State University in 1962 with a Bachelor of Science in business and went right to work in the resort development and management field.

While a college student Clay worked as a lifeguard during the winter at the Camelback Inn in Arizona. Summers he worked for the Grand Teton Lodge Company, which was owned by Laurance Rockefeller and part of the RockResorts Company. Upon graduation Clay was hired for a year-round position with the Lodge Company. During that time he also joined the U.S. Marine Corps Reserves.

In 1964 Clay was transferred to the British Virgin Islands to help open a new Rockefeller Resort, Little Dix Bay. That was such a great job, as Clay described it, because he had to water ski and scuba dive almost every day. After seven months Clay was transferred to Hawaii to help open another Rockefeller hotel, Mauna Kea Beach Hotel on the Big Island. In Hawaii he met the love of his life, Shay. They wed there in September 1966 and just recently celebrated 49 years of marriage.

While in Hawaii, Clay served in the Army National Guard. He was discharged one day before his unit was activated and sent to Vietnam.

After five years, and with a brand-new son, Clay was transferred to Caneel Bay Plantation in the U.S. Virgin Islands, where he was concessions manager in Virgin Islands National Park. After two years he and his family headed back to Jackson Hole. There he served for six years as operations manager for the Lodge Company. In 1976 he was transferred to Puerto Rico to be manager of the Dorado Beach Hotel. After his time Puerto Rico he left the Rockefeller organization and worked for the next eight years in resorts in Washington, Texas and Florida.

Wyoming continued to beckon, and in 1984 Clay returned as general manager of Grand Teton Lodge Company. In December 2006 he retired — after 32 years and three different assignments — as president of the Lodge Company.

During Clay’s long time working and living in Grand Teton National Park he became an eloquent advocate for the importance of national parks. He worked to protect the park’s natural and cultural resources while serving millions of visitors each year. The National Park Service recognized the great partner that Clay was and always appreciated the exceptionally high bar he set for serving park visitors through his leadership of the Lodge Company. He was considered the best of the best by many Park Service colleagues. The Park Service consulted with Clay on many issues and invited him repeatedly to serve on special committees representing the business interests of concession operations throughout the entire national park system.

After his retirement Clay began working part time for the Rockefeller Estate as project manager for the transition of the JY Ranch to the Park Service. The project was completed in 2007, and the Laurance S. Rockefeller Preserve opened to the public in 2008. Clay was honored to help with the transfer of that exceptionally generous gift to the American people from Laurance S. Rockefeller. He considered it one of the highlights of his career.

Shay and Clay enjoyed traveling and spending time with their two children and four grandchildren. Their son, Scott, lives in Phoenix. He is a program administrator in Arizona’s retirement system and is dad to the James grandkids Emma and Cole. Emma is at Regis University and Cole is at Science and Humanities High School. Shay and Clay’s daughter, McKenzie, owns her own business, Summit Appraisal Services in Jackson. She is mom to Rigdon and Riley Hammond, who attend Davey Jackson Elementary School and Rafter J Learning Center.

Throughout his distinguished hospitality career, Clay was active in many professional organizations and served on countless boards, including as president or chairman of many. These include the National Restaurant Association, Wyoming Lodging and Restaurant Association, American Hotel/Motel Association Resort Committee, Small Properties Committee, Jackson Hole Chamber of Commerce, Wyoming Tourism Board, Grand Teton Music Festival, Community Foundation of Jackson Hole, A Christian Ministry in the National Parks, Grand Teton Natural History Association, National Park Hospitality Association, Wort Hotel Board, Wine Auction Committee, Jackson State Bank, Rotary Club, Wyoming Taxpayers Association and Teton Medal Association, He served as a representative to the 1995 White House Conference on Tourism and as Wyoming representative to the 1996 Western Summit on Tourism and Public Lands.

Among the many awards presented to Clay were the Big Wyo Award for Wyoming’s Travel Person of the Year in 1995, the Chamber of Commerce’s Jackson Hole Citizen of the Year in 2002 and Resort Executive of the Year in 2002. Clay was also recognized by the Department of the Interior and the Park Service for his excellence in environmental stewardship.

While the awards are testament to just some of Clay’s extraordinary works, it’s the many people whose lives he touched who are the best in describing how special he was. During his tenure at the helm of the Lodge Company, Lodge Company employees looked up to Clay and respected his caring management style. They appreciated his kind ways and revered the family atmosphere he and Shay created for them year in and year out. Hundreds of former and current employees around the country consider themselves part of the extended James family and are mourning with the immediate James family now.

Clay is survived by his beloved wife of 49 years, Shay Orlin James; his son, Scott, of Phoenix; his daughter, McKenzie James Hammond, of Jackson; grandchildren Emma James and Cole James, of Phoenix, and Rigdon Hammond and Riley Hammond, of Jackson; Jennifer James, mother of Emma and Cole; and Robert Hammond, father of Rigdon and Riley. He also is survived by his brothers, Thomas (Debbie), of Flagstaff, Arizona, Jeremy (Cindy), of Scottsdale, Arizona, and Andrew (Kathy), of Billings, Missouri, and so many wonderful nieces and nephews.

All are welcome to attend Clay’s service. Teton Park Road will be closed for the season, so people will need to travel on Highway 89/191 through Moran Junction to reach Jackson Lake Lodge. Condolences may be sent to Clay's family through valleymortuary@gmail.com or this website.

To order memorial trees or send flowers to the family in memory of Clayton James, please visit our flower store.