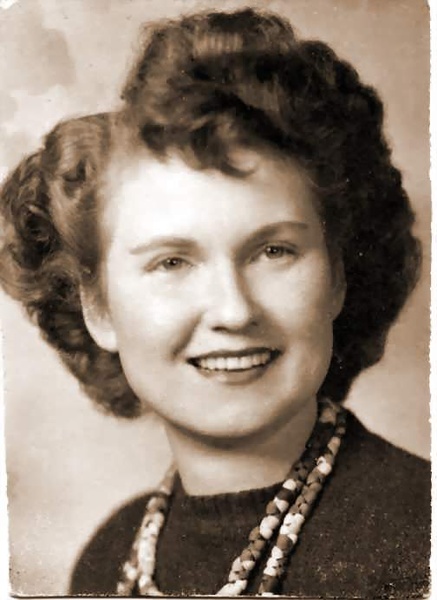 Cleo grew up in the eastern Montana Missouri Breaks on a ranch homesteaded by her mother, Winnie Lee Davenport (from east Texas), and her father, William Smith Davenport (from Kentucky). They hauled drinking water in barrels from the river on a sledge, had no electricity, and lived in a two-room house.  In 1936, the US government bought the ranch in preparation for building the Ft. Peck Dam, and the family of nine moved to Jordan – Cleo was 14.  A blue-eyed, auburn-haired beauty with an infectious laugh, she graduated from Garfield County High School and won a scholarship (with the help of her high school principal) to University of Montana Western in Dillon, Montana, where she graduated from “normal school” and became an elementary school teacher.  Her first job was in Highwood, Montana, where she and fellow teachers lived in rooms over the local bar and restaurant.  She taught grades 1, 2 and 3 in one room. In 1943 she worked the summer in Seattle for Boeing as a Rosie Riveter; because of her small size she worked inside the planes.

In spring of 1944, she met her future husband, Harry Elser (a brand new first lieutenant and meteorologist in the US Army), on a blind date arranged by a teacher friend.  She and Harry married in Butte on December 22, 1944, and she joined him via the first plane ride of her life for Christmas and New Year’s at his White Horse posting in Yukon Territory, Canada. They shared a deep commitment to one another, family life, education, and having fun for 35 years.

After the war, her husband joined the US Weather Service as a weather forecaster.  She went with him to Washington DC where he received orientation, and they accepted his first job in Great Falls, Montana, where daughter Diana was born. The Weather Service next took them to Helena, Montana where daughter Shelley was born, and then to El Paso, Texas, where son Ray was born.

In El Paso, Cleo became the Ranchland Hills PTA President, helping to organize get acquainted “coffees” in support of integration in the schools. The family then enjoyed a temporary assignment in Montreal, Canada, moved back to Great Falls briefly, then Bountiful, Utah and Boise, Idaho.  During the Utah years, Cleo served on the board of deacons for the Bountiful United Church of Christ, and was active in Davis County League of Women Voters and Planned Parenthood. An accomplished seamstress, gardener, dancer, and avid reader, she was practical, had a great sense of humor ̶ and not a shred of self-indulgence.

After her husband died in 1979, Cleo moved from Boise to Jackson, Wyoming, where she worked in her daughter’s jewelry business (DanShelley Jewelers, Gaslight Alley), and got to know many Jackson locals.  Cleo and her husband had been key investors who helped grow the Gaslight Alley business over time, and Cleo continued that support. She was active in the Teton County League of Women Voters, and the Senior Center Book Club. With friends and sometimes family, she toured Australia, cruised the Mediterranean, spent time in Hawaii and Mexico, and enjoyed many Elder Hostel adventures across the American Southwest.  She was able to live at home with her son Ray until the last 16 months of her life when her dementia and physical problems became more severe.

To order memorial trees or send flowers to the family in memory of Cleo Elser, please visit our flower store.