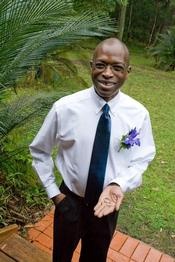 Damian Antione Walker August 31, 1962 - May 28, 2012 Damian was born on August 31,1962 in Pittsburgh, Pennsylvania to Thelma and Clarence Walker. He lived on the North Side until moving to Penn Hills in 1972. While growing up, Damian was fascinated with reading, especially World War II history. He would borrow from the library any book he could on the subject. Damian's deep passion for music began while his dad owned a music store. He enjoyed listening to a wide range from jazz and classical to rap and punk. In his spare time, Damian built model airplanes and cars and listened to radio talk shows. He graduated with high honors in 1980 and attended Allegheny College with a major in international law. While at Allegheny College, Damian became a member of Phi Kappa Psi fraternity. He was extremely proud member of his fraternity and frequently kept close contact. After 3 years, Damian had to stop going to Allegheny, and returned to Penn Hills. He started work at Le Petit Cafe and then moved out on his own. He stayed in Pittsburgh until 1998 when he moved to Jackson, Wyoming. He was a park ranger and enjoyed the solitude of the wilderness. He worked at the Alpenhof and Burke's Chop Shop (now The Garage) enjoying life. He took a trip to Germany in 2003 and made friends that would become his second family. However, in 2009, Damian was first diagnosed with lymphoma. He underwent chemotherapy and seemed to be rid of it. It returned yet again and he underwent chemotherapy again. After the second time, he seemed to be truly over the ravages of cancer. He planned to go back to Allegheny College to finish the degree he started so long ago when complications finally took his life. Damian is survived by his brother, Bryan, and the many, many friends he met during his short life.

If you are looking for a way to memorialize Damian, please consider supporting his favorite library, the Teton County Library. (www.tclib.org ) You can click on the big green "support the library" icon. If you prefer to not use the online pay service, you can send it in. You can contact Pauline, who is responsible for the Foundation. You can also contact Laura Burke at the Garage, who proposed this wonderful idea. Damian lived close to the library and it was a second home to him. His house was a sort of library annex. What a collection! Be sure, when donating, to state that it is in Damian's name. Thanks, Maria, for your help with the donation.

To order memorial trees or send flowers to the family in memory of Damian Walker, please visit our flower store.