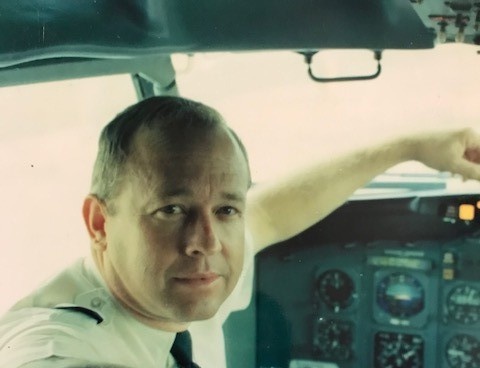 Doyle R. Vaughan passed away at his home on October 7th surrounded by his family. He was 87 years old.

Doyle was born on August 21, 1933 to Lloyd and Pearl Vaughan at his Grandparents farm in Farwell, Texas.

He spent a considerable amount of time on his Grandparents (Henry and Grace Curtis) farm, as he was growing up, and there he developed traits that characterized the man he became…love of family, love of the Lord, faith, honesty, hard work, compassion for animals and absolute love of music.

As a young boy, he one day had an opportunity to attend a fair in New Mexico. A pilot landed his plane in a nearby field and Doyle approached him and was able to sit on the wing. From that day forward it was airplanes! To say that aviation has been his passion since that day in the field would be an understatement. In 1952, Doyle was drafted for the Korean War.

Doyle kept his eyes on the sky! After his discharge from the Army he worked at a local airport, fueling and washing planes to earn enough money to pay for flying lessons. He soloed in 1959 and never ever looked back. He did anything he could to build time, flight instructing, charters, and crop-dusting all over the country. He and a dear friend even owned a music store to earn money to fly.

In 1962 he was selected to be an instructor pilot for the Army in Fort Wolters, Texas. There he taught young officers to fly that were heading to Viet Nam. During his stint there he acquired about 5000 hours of helicopter time. After that, Hughes Tool Company hired him as a corporate pilot in California and Nevada. Among his many duties he piloted some of the future astronauts back and forth from New Mexico to Florida as the US began the space missions.

In November of 1966, while working for Hughes Tool Company in California, Doyle met the love of his life, Diana, a new TWA stewardess. They married in July of 1967. In 1968, Doyle and Diana moved to Las Vegas, Nevada where Doyle worked for Robert Maheu, who was the Chief Executive for Howard Hughes.

In April of 1969, their daughter, Judy was born. Soon after, Doyle and Diana and 6-week-old daughter Judy moved to Wyoming where he operated an FBO in Buffalo for 3 years as well as flight instructing and aerial spraying. Their son Kevin was born in Buffalo in 1971. It did not take long to fall in love with Wyoming and the Wyoming way of life. So…the decision was extremely difficult to leave for a better job in aviation.

In 1972 Federal Express Corporation began and Doyle was hired as one of the first group of pilots. After 6 months of flying all night, (he was an early morning guy) Doyle heard of another start-up company in Texas - Southwest Airlines and he applied. When Southwest Airlines hired Doyle in 1973 there were 17 pilots, 35 flight attendants, 3 airplanes and they flew to 3 cities in Texas. He was so proud to tell that story.

After living in Texas for 11 years the desire to move back to Wyoming was even stronger. He was number one pilot in Houston so he thought the commute was something he could do. In 1984 the family moved to Jackson (the best air service for someone commuting) and have remained there to this day. Wyoming is home! In 1985 he flew the first 737-300 to land at Jackson Hole Airport. Southwest had 13 ski charters that year from Houston and he flew the first flight and several others that season.

Because of the Age 60 Rule Doyle was forced to retire in August of 1993 from Southwest Airlines. After retirement from the airlines he continued to help wherever he could with aviation opportunities. He attended career days at the High School, helped load planes at the Young Eagles events, flew charter trips, lobbied for aviation related activities and mentored many young pilots.

In 1999 he was appointed to his first of two five -year terms on the Jackson Hole Airport Board. He served twice as President of the Board (2004 and 2009). During his tenure they were able to secure an over run area for the short runway, remodel and expand the airport facility, secure funding for the state of the art baggage area, as well as obtain centerline lights. After his retirement from the Airport Board he was appointed to serve on the Wyoming Aeronautics Commission, and served two terms. He is one of the only commissioners to have served on Aeronautics that has a commercial aviation background. Doyle is being inducted into the Wyoming Aviation Hall of Fame this year.

During his aviation career, which expands 50 years, and more than 28,000 hours flying time, Doyle was always a true ambassador of aviation. He counseled young boys and girls wanting to make a career in the field, and he has successfully recommended countless people for various aviation jobs. He was responsible for recommending the first female pilot to be hired at Southwest Airlines.

Following pandemic precautions, a memorial service is pending in the future.

Those wishing to memorialize Doyle’s life may consider a gift to the Young Eagles program – introducing kids ages 8 – 17 to aviation. www.tetoneaa.com,, the First Baptist Church of Jackson, WY. or Samaritans Purse.

To order memorial trees or send flowers to the family in memory of Doyle Vaughan, please visit our flower store.