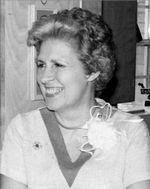 Ellen D. Cloetta, 90, passed away Monday, January 18, at the Living Center in Jackson, after a lengthy illness.

She was born on July 8th, 1919, in Brownsville, Texas, the first of three children of Adolph and Iva Dittman.

She was a lifelong Brownsville resident up until 4 years ago when she moved to Jackson in order to be with her son and his family.

Ellen received a degree in library science from Texas State College for Women in 1941, which was fitting, given her love of reading, and worked as a librarian for much of her adult life. She met and married Conrad Cloetta in the late 1940s. To this loving couple was born one son, Larry, in 1950. She was a devoted wife and mother who gave her all to her family, and had many lifelong friends. She enjoyed reading, and travel, and the company of good friends.

Shortly after her husband of 44 years passed away in 1993, she was blessed with a granddaughter, Catherine Cloetta, who she adored. Declining health prompted a move to River Rock Lodge in Jackson in 2006, to allow her to be closer to her son, granddaughter, and daughter-in-law, Rebecca Cloetta, who took loving care of her. Being from South Texas, she was no fan of cold weather, but relished the opportunity that being in Jackson gave her to watch her granddaughter grow up.

Ellen was preceded in death by her husband, Conrad, and her sister, Iva. She is survived by her brother Adolph, her son, Larry, her granddaughter Catherine, her daughter-in-law Rebecca, and several nieces and nephews.

Under the Direction of Valley Mortuary, Jackson, Wyoming and Garza Memorial Funeral Home in Brownsville. Condolence may Be sent to the family at www.valleymortuaryjackson.com

To order memorial trees or send flowers to the family in memory of Ellen Cloetta, please visit our flower store.