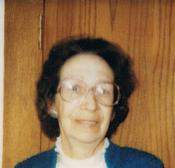 Evelyn Christiana Sorenson, 87 of Jackson passed away Saturday, Sept. 17, 2011 at St John's Living Center where she had been living for the past 2-1/2 years. She was born Mar. 10, 1924 in Greybull, Wy. To Lloyd L. and Anna C. Jennings. Evelyn and her family moved to Jackson in 1965. She had been married to Albert Martin Sorenson who preceded her in death.

Evelyn worked for many years at the Wort Hotel as a prep chef. She loved to fish and was a master at crocheting beautiful table cloths and doilies.

Evelyn was a happy go lucky person & will be greatly missed by her family and friends. She will be interred at Greybull Cemetery in Greybull, Wy. Private services will be held. Condolences can be sent to the family and viewed at valleymortuaryjackson.com

To order memorial trees or send flowers to the family in memory of Evelyn Sorenson, please visit our flower store.