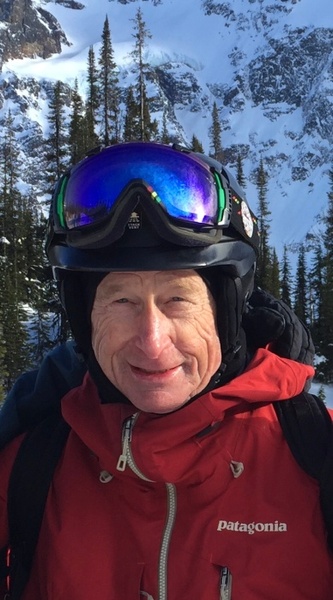 Passion for Skiing and Adventure with a Sense of Humor
Jackson resident, James Renwick Kerr III, ‘Renny’, 71, died of pancreatic cancer on
February 21, 2018. He died while calmly sleeping without pain or discomfort. With
courageousness and grace, Renny accepted his diagnosis and spent much of his last
months doing all he could to prepare his beloved wife Sarah for his death. Always
thorough, his preparations included renovations on their house, financial advice and
even video taping lessons on how to use the 4-wheeler.
Renny was born in Philadelphia, Pennsylvania in 1946. His parents, James Renwick Kerr
Jr. and Mary Alice (Borie) Kerr raised him in both Chestnut Hill, PA and Unionville, PA.
Renny attended the Chestnut Hill Academy, Chestnut Hill, PA, The Gow School, South
Wales, NY and New England College, Henniker, New Hampshire where he graduated
with a business degree.
Renny’s father was a passionate horseman as well as master of local fox hunting groups.
This instilled in Renny a lifelong love of riding. He became a skilled horseman in his own
right, growing up fox hunting with his father, and later taking up polo and competing
with the Brandywine Polo Club in Toughkenamon, PA. But it was from his mother that
he acquired his gentle way and easy humor, qualities that readily earned him the trust of
horses and people alike. After college, Renny joined the National Guard of Pennsylvania
and became a member of the First Troop Philadelphia City Cavalry, the original unit that
protected George Washington. Through the Troop, Renny participated in the 200-year
anniversary re-enactment of Washington’s ride from Philadelphia to Boston in which
Washington took control of the Continental Army. In the re-enactment, Renny and his
fellow Troop members followed the same route of 200 years earlier on horseback.
Being a member of the Troop and participating in this ride was an honor he enjoyed
immensely and he often shared stories about the adventure.
After his time in the National Guard, Renny bought from his father Penn-Del Supply
Company, in Toughkenamon, PA. He successfully ran this business for many years.
Penn-Del provided hardware, lumber, fuel oil, and horse feed to the Chester County
mushroom growers and the horse racing community. His next business endeavor was to
found with his business partner, Mike Norris, Generic Business Solutions, a software and
point of sale system for paint and wallpaper businesses. For 12 years, Renny and Mike
sold and installed systems from Maine to Georgia, building a solid business and an
enduring friendship.
Renny’s stepfather, Morris Brownell, introduced Renny to alpine skiing and sailing.
These two passions remained with Renny his entire life. In 1989, soon after selling
Penn-Del, he traveled with a group of 40 members of the Philadelphia Sailing Club to
Tahiti. It was on this trip that he met his wife Sarah, who was also a member of the club.
They sailed around the Tahitian Islands for the next two weeks, and so began their great
adventure together. The following years brought more sailing on the Chesapeake Bay
and overseas, skiing with friends at Elk Mountain, Union Dale, PA, house boating on
Rehoboth Bay in Dewey Beach, Delaware, biking adventures and more. They married in

1996. In 2010, Renny and Sarah completed an epic 3,600-mile cross-country bicycle
journey from Oregon to New Hampshire, raising thousands of dollars for charity. At the
end of this, Renny said to Sarah, “if we can make it through this, we can make it through
anything”.
In 2001, Sarah encouraged Renny to close his business and fulfill his dream of skiing
Jackson Hole “for a season” while she held down the fort back east. Renny and his
brother-in-law, Rod Moorhead, spent the winter skiing Jackson Hole and loving every
snowy day. Renny quickly resolved that he and Sarah belonged in Jackson Hole and the
following November they packed up their gear and drove west. The Mountain Sports
School hired them as instructors and the rest is history. They became part of the JHMR
family and dedicated members of the community. Over the next sixteen years they built
friendships, memories and made Jackson Hole their home. Summertime, Renny worked
as a wrangler at R Lazy S Ranch and in the winter, he taught skiing. In both endeavors,
he regaled his guests with hilarious stories and recollections about his many
experiences that often featured his brother Freddy. His dry wit and ability to craft a
story became legendary among family and friends. He could draw in his listeners,
captivate them, and then leave them laughing to tears.
Renny was also a natural teacher. He had a way of communicating in a simple and gentle
manner that instilled confidence on the slopes, on the horse, or simply navigating life in
general. His ability to speak as ‘Donald Duck’ enchanted children. Renny graciously
entertained numerous early evening calls from friends asking if Donald Duck would say
goodnight or sing to their young.
He was a devoted husband, son, uncle, brother, brother-in-law and loyal friend and will
be deeply missed by all. Renny leaves a legacy of an exemplary mentor, partner and
friend. His humor, common sense and optimism are missed most especially now in the
moment of his death, when he himself would be so adept at comforting us. But in true
Renny fashion, he leaves us with one more lesson in resilience, and the opportunity to
rise to his example.

Fred Brownell and Lawrence D. Brownell, nephews, Rodman W. Moorhead IV and Clay
Wetherill Moorhead, great-nephews Rodman Quinten Moorhead and Clay Wetherill
Moorhead, Jr., as well as many others who were lucky enough to have known him.
A memorial service to celebrate his life will be held on Sunday, March 18, 3:00 PM at the
Presbyterian Church of Jackson Hole. A second memorial service will be held on April
26, 11:00 AM, at the Unionville Presbyterian Church, Unionville, PA, for all the East Coast
family and friends who loved Renny.
In lieu of flowers, Renny’s desire was to have donations made to The Friends of
Pathways, FriendsOfPathways.org, P. O. Box 2062, Jackson, WY 83001 or Teton County
Search and Rescue, TetonCountySAR.org, P. O. Box 1063, Jackson, WY 83001.

To order memorial trees or send flowers to the family in memory of James "Renny" Kerr III, please visit our flower store.