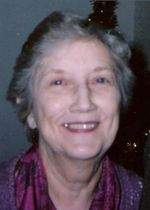 Jane Lambrecht Kjos passed away , surrounded by family, of natural causes at St. John's Hospital in Jackson Wyoming at the age of 84. She was born to John and Edna Lambrecht in Sharon Pennsylvania on December 21, 1924.

After graduating from Sharon High school in 1942, she worked at the Westinghouse factory in Sharon for a couple years, and then left for Washington, D. C. to pursue a career with the U. S. State Department. Jane worked abroad for 15 years; she traveled throughout the world and was stationed in Hong Kong, Athens Greece, and Addis Abba, Ethiopia Africa. One of the highlights of her career was when she was traveling around the globe and working for some of the top foreign policy makers of the Truman and Eisenhower administrations. She enjoyed life abroad and meeting people from other countries and backgrounds. In Ethiopia she met Donald Kjos, a pilot working for the USDA foreign aid program. Jane and Don married in Africa, had a son, and then resided in Addis Abba for a couple years, then they were transferred to Tripoli, Libya until they returned to the Untied States. Jane and her family moved to North Dakota so her husband could continue his education and obtain a degree in Engineering. After that the family lived in Kansas while her husband worked for Beachcraft as a test pilot. When her husband passed away she returned to Sharon , Penneslyvania and worked for the Sharon City School district as an administrative assistant until 1978. She then moved to Arizona and lived and worked at the South rim of the Grand Canyon before moving to Sun City to retire. About 10 years ago she moved to Jackson, Wyoming , where her son's family lives. After retiring, Jane volunteered for the Meals on Wheels in Sun City and the Hassayampa Nature Reserve in Williams Arizona located just west of Sun City.

In Jackson she resided at Pioneer Apartments, River Rock Lodge, and St. John's Living Center where she touched the lives of many local residences and caregivers. She will be remembered for her quick wit, compassion for others, and a warm smile. Jane loved adventure and travel and later in life was an avid reader.

A memorial service is scheduled for April 4th at the St. Paul's United Church of Christ 159 Todd, Ave. Hermitage , Pa.

To order memorial trees or send flowers to the family in memory of Jane Kjos, please visit our flower store.