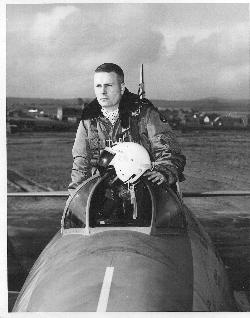 John was born December 22, 1924 in Jackson, Wyoming.. His parents, Homer and Eliza Richards, were original homesteaders in the Jackson Hole Valley. While attending college in Laramie, Wyoming, John met and married Virginia VanDeBurg. John served 26 years in the Air Force as a fighter pilot serving in World War II and the Korea and Vietnam wars, retiring as an Air Force Major. During his service, he and Ginny lived in Germany, Alaska and Florida. While John was stationed in Thailand, Ginny and the kids stayed in the states living on the Snake River Ranch outside of Jackson with her parents, Lloyd and Ardith VanDeBurg. He often told the story of attempting to call home during the war requesting the Wyoming area code and phone number 1, which would confuse the operator.

After retiring from the Air Force, they returned to their hometown of Jackson and assisted his parents in running the Flame Motel. John became a prominent Real Estate Agent in the Jackson Hole Valley until moving to Oregon. They left Jackson in 1996 to reside in La Grande, Oregon, until 2010, at which time they moved to be with their daughter's family in Post Falls, Idaho. John was a member of the Jackson Airport Board; a member of the Jackson Hole Masonic Lodge; and the Jackson Hole Shrine Club. He enjoyed assisting with the Shriner's cutter races each year. .

John's first love was his wife Ginny, and then flying. He loved the Jackson Hole Valley under the shadow of the Teton Mountains and always considered it his home. He is survived by his wife of 65 years, Virginia Richards, his son Jim Richards, of La Grande, Oregon, a daughter Susan Walker,her husband Irv of Post Falls, Idaho, and six grandchildren. He will be missed by all.

A service will be held on Saturday, March 1, 2014 at 10:00 a.m. at the Masonic Lodge located at 281 King Street, Jackson, Wyoming, with a graveside committal following at Elliott Cemetery outside of Wilson, Wyoming. A brunch will be provided back at the Lodge.

In lieu of flowers, the family requests donations to the Wounded Warriors Fund or the Fisher House Foundation in honor of John's military service.

To order memorial trees or send flowers to the family in memory of John Richards, please visit our flower store.