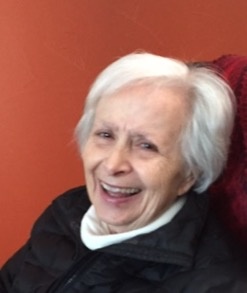 Katharina (Kati) Kolleth died peacefully on June 19, 2016 at St. John’s Living Center,  surrounded by her son, John Fox and loved ones.  Kati was born in Yugoslavia in 1933.  She was a young child when her family moved to Innsbruck, Austria.  The family worked hard on their farm to create a new life but sadly World War II broke out.  Kati spoke often of those days saying that while she never went to bed hungry, the sadness of hearing bombs left her, her mother and sister to emigrate to the US after the war.  After coming through Ellis Island, they found work and moved to Dearborn, MI where she attended high school.  Graduating with honors and president of the mathematics club, she went onto college.  While attending college, a secretarial position at Ford Motor Company presented itself and she jumped at the opportunity.  Kati raised her two boys, John Fox and Robert Fox while working full time at Ford.  Her skills with numbers, ability to speak three languages and fierce work ethic allowed her to climb the ladder at Ford.  One of her last positions was Executive Assistant to Philip Caldwell, Chairman of the Board.  She retired from Ford Motor after 50 years of service and a love for the American dream.  Lastly, her greatest pride to discuss was her dedication and love of her family.  Kati was an extremely generous woman, who taught her family the importance of giving back, not just financially, but also through her unique way of lifting people up personally and emotionally.

A Catholic funeral service for Kati will be celebrated at 10:30AM on Wed, June 29th at Our Lady of the Mountains Catholic Church in Jackson.  She will be entombed at Holy Sepulchre Mausoleum in Southfield, MI at 2:30PM on July 1, 2016.

In lieu of flowers, donations can be made to the Katharina Kolleth Memorial Fund of the Community Foundation of Jackson Hole at: http://www.cfjacksonhole.org/donors/katharina-kolleth-memorial-fund/

Condolences may be sent to Kati's family through this website.

To order memorial trees or send flowers to the family in memory of Katharina Kolleth, please visit our flower store.