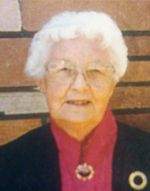 LaPreal Grace Weekes Blair was born October 28, 1914 at her parents' home in Victor, Idaho. She was born to Jane Thompson and Francis Ezra Weekes, the third child in a family of seven children. LaPreal had five brothers and one sister. All of the Weekes family were very musically inclined and a joy to hear at a family get together. She was raised in Victor and Jackson. Her father, a carpenter, came to Jackson to build log cabins for Struthers Burt at the Upper Bar BC Ranch. Usually, LaPreal's mother and the children stayed in victor to take care of the farm while he was away. One summer, the family came over to Jackson to stay with him while he worked. That was probably when LaPreal met Lewis Blair. Lew was born in Victor, and both of them loved to tell the story that LaPreal was born on the north side of the highway. However, they didn't know each other until they met in Jackson, where both of their fathers worked. We don't know much about their courtship, but LaPreal did admit that she met Lew after she threw a rotten tomato at him. LaPreal did know how to get her man. Lew and LaPreal were married in Driggs, Idaho on April 25,1931.

LaPreal attended school in both Victor and Jackson. She graduated from the Jackson-Wilson High School just a month or two after her marriage, in the spring of 1931, in the largest graduating class the high school had had up to that time.

By this time, Lew's father had passed away, and his mother needed some help. The newlyweds moved in with Lew's mother to help her. Her home was at the corner of Simpson and Willow Streets where the Learning Center was later built. Both Calvin and Mabel were born in this house, Calvin on March 17, 1932, and Mabel on September 2, 1933. After Lew's mother passed away, the growing Blair family had to find other living arrangements. they bought a lot on East Kelly Street. Lew bought a two-room house from behind the old Jackson State Bank by the creek. With his team of horsed, he moved it onto the East Kelly Street property, where he added onto the two rooms to complete the Blairs' second home. The house still sits on East Kelly Street today. Nadeen was born there on June 10, 1936. LaPreal worked for Dr. MacLeod at one time, cleaning and housekeeping. Perhaps he convinced her to have her next baby at St. John's Hospital. That was where Mary was born on December 17, 1940. Colin was also born in the hospital on October 18, 1943. Lew's family had always been involved in ranching,and it was his and LaPreal's dream to own a ranch. They got a chance to buy the Haight place in South Park in November 1947, so they borrowed and scraped enough money together to buy it . They were able to keep their house on Kelly Street, which they rented to Harold Kelly for years. he finally bought it from them. The Blairs moved out of town to the ranch, where they worked hard, taking care of cows, horsed, and other livestock. One year they raised turkeys. The first winter they lived there, Calvin says they nearly froze to death. There were wide spaces between the logs of their their home where the wind blew through. The doors didn't fit tight. They had two heaters going, and still they couldn't keep warm. But Lew was consummate carpenter. By the nest winter, he had done a lot of repair work on the house and installed a coal furnace. They lived quite comfortably then. Ranch live included cattle drives, pack trips, and hard winters. But they loved every minute of it. LaPreal worked right alongside Lew in the hay fields and the barns. Her house was used many times to take care of newborn animals. More than once, she brought calves into her kitchen to thaw them out and feed them. One year, their baby pigs nearly froze. LaPreal put them in a cardboard box in front of the heat vent from the furnace. Before long, little pigs were running around the kitchen floor. as soon as LaPreal knew they were going to be ok, she sent them back out to the barn. She joined and was active in the CowBelles. Though the Blairs enjoyed life on the ranch, the Grueling work and the difficulty of finding pasture for cows took its toll. About 1959, the Blairs sold the ranch. That same property is now known as Cottonwood Park. The Blairs moved back into town, Building the house on 550 East Simpson Street. Together, they enjoyed camping, fishing, first snowplaning, and then snowmobiling. A few years before Lew Passed away, they enjoyed traveling during the winter, visiting friends and relatives who lived in warmer climes. After Lew passed away December 15, 1979, LaPreal lived there alone . LaPreal was raised as a member of The Church of Jesus Christ of Latter-day Saints. Though she had not been active during her marriage, after Lew passed away, LaPreal became very active in the Jackson First Ward. She served in a Relief Society Presidency, was a Compassionate Service Leader, and was a Visiting Teacher for many years. She loved her yard and her flowers. Hundreds of flowers from her yard bloom in the yards and gardens of her friends and neighbors. She was Generous to a fault with starts of flowers. LaPreal often worded from dawn to dark, even when she was in her nineties, mowing, weeding, and watering her large yard. In the winter time, her sidewalk was always shoveled early in the morning, and the snow pushed away from her garage door, ready for Gine Sinn the plow. As LaPreal got into her later years, she had difficulty living alone. She moved to River Rock Assisted living in August, 2008. As the months went by, it became necessary for her to have even more care, so in May, 2009, her daughter Mary took her to live with her in her home in Rock Springs. In September of 2009, LaPreal fell and broke her hip. Since then, she was confined to a hospital bed and a wheelchair. LaPreal passed away the morning of July 1, 2010. She was preceded in death by her parentys and her brothers: Marion,Cecil,Doad,Don,and Merrill Weekes: her son Colin; two grandchildren; and one great-grandchild. She is survived by her sister, Clair Bell; her son, Calvin (Virginia) Blair; daughters, Mabel (Don) Eaton, Nadeen McJunkin, and Mary Froman; 13 grandchildren, 29 great-grandchildren, and 14 great-great-grandchildren. LaPreal was a lovely person who cared deeply for her family and friends. her name in French means, The Pearl, and LaPreal was certainly a priceless pearl full of kindness and goodness. We will all miss her.

To order memorial trees or send flowers to the family in memory of LaPreal Blair, please visit our flower store.