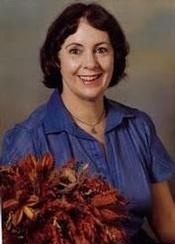 Lois Ann (Irion) Thieme, age 79 passed away on Monday, September 30, 2013 in Salt Lake City following a lengthy battle with post surgery recovery and therapy from an incident in 2011.

Lois was born on July 7, 1934 in Colorado Springs, Colorado, the only child of Buford E. Irion and Cyrena M. (Hook) Irion. Her early years of live where spent on the road with her parents living in Colorado, Arizona, Wyoming and New Mexico in various camps while her father worked as an Engineer and Surveyor for the Bureau of Public Roads. After obtaining school age, the family would settle in Denver, Colorado during the winter months so Lois could attend school and get her education. She graduated from East High School in Denver and attended the University of Denver graduating in 1961 with a Bachelor degree in Fine Arts and Advertising Design.

After graduating from college, Lois went to work for the U. S. Army Special Services in Germany and was in charge of an Army Special Services Club. There she met and fell in love with the love of her life Hans Winfred Thieme and they were married on February 14, 1962 in Elwangen Jast, Germany. Lois and Winfred returned to Jackson, Wyoming where her parents were living and began to set up life there.

After losing her husband in 1964 to a motorcycle accident, Lois changed her career path and in 1969 went to Thailand and was in charge for the entire United Services Organizations operation on Nakhon Phanom Royal Thai Air Force Base in Thailand. In 1971, Lois became the administrative assistant for the Intelligence Center at the U.S. Embassy and worked directly with ambassadors and military attaches stationed in Laos until the coalition government fell and all U.S. citizens where required to leave the country after destroying all their files.

Lois was reassigned to a safer post in San Diego, California where she worked for the U. S. Naval Center and the Naval Sea Support until April 1981 when she returned to Jackson, Wyoming to be closer to her parents and help take care of them. Lois began her 27-year career at Grand Teton National Park as a purchasing and contracting assistant and also supported 9 other national parks providing the same services for them.

Lois retired on July 3, 2008 after serving nearly 38 years in the federal government in many positions and assignments. She continued to living in the Jackson area where she enjoyed working on her family history, writing about the history and her travels overseas. Lois was an active member in the Eastern Star and the Daughter's of the American Revolution where she participated and held many offices. She was very active in her church until it lost it's building and disbanded. Lois stayed active in the community working at various concerts and social functions, clubs, etc and enjoyed the varied activities that where being offered in the Jackson area.

Lois's parents and husband predeceased her and is survived by numerous cousins and many friends. She will be greatly missed by her family and friends. In lieu of flowers, donations can be made to the local chapters of the Daughter's of the American Revolution or the Eastern Star on behalf of Lois or to your charity of choice.

The family would like to thank everyone for their kindness and thoughts for Lois during these last 2 years and all the support you gave her.

A private family interment will be at Elliot Cemetery in Wilson and a Memorial Service will be held at noon on October 25, 2013 at the Valley Mortuary, 950 Alpine Lane in Jackson, Wyoming. Refreshments will be served following the memorial service at the mortuary.

To order memorial trees or send flowers to the family in memory of Lois Thieme, please visit our flower store.