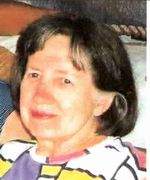 Gean was a retired Registered Nurse having received her nursing training from Bryn Mawr hospital (PA) and Cuyahoga Community College (OH). She was a longtime resident of Fairview Park, OH prior to relocating to Jackson, WY in 2005.

Gean is survived by her 5 children including 3 daughters: Karen Dyer of Marysville, PA, Deborah Phillips of Jackson, Wyoming and Jill Smith of Victor, Idaho; 2 sons: J. Scott Markley of Houston, TX and R. Neal Markley of Huron, OH; 6 grandchildren and 2 great-grandsons and a brother J. Gale Reekie of Lancaster, PA. She is preceded in death by a sister Barbara Rishel.

Funeral services will be held at 11:00 A.M. on Friday, February 6, 2009 at the Mauk and Yates Funeral Home in Juniata, PA. Burial will be in the Rose Hill Cemetery.

Memorials can be sent to the American Cancer Society or Homecare/Hospice of Jackson Hole.

Friends can send condolences to the family at valleymortuaryjackson.com.

To order memorial trees or send flowers to the family in memory of Margaret Markley, please visit our flower store.