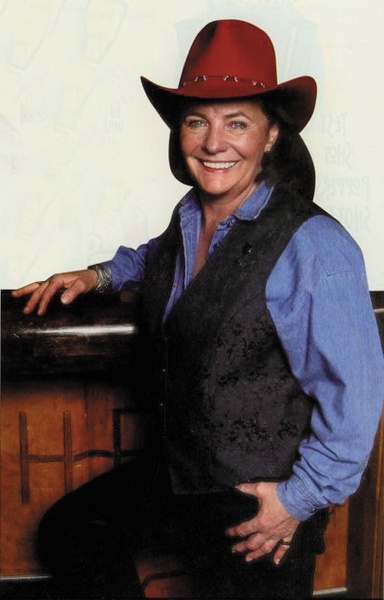 On June 5, at 6:00 a.m., Margene Jensen, art gallery owner, mother, cocktail waitress
extraordinaire, Goddess of the Firewater, made last call, turned out the lights, and
took a quiet exit from a boisterous and extraordinary life.
As a 6 th generation Wyoming girl, born into an LDS family that settled in Star Valley
at the behest of Brigham Young, Margene seemed destined to lead an exemplary life
of community service and strict Mormon principles. Her grandfather was the Bishop
in Thayne.
But Margene had other ideas.
When she was in high school in Afton, Wyoming, many of the girls worked in
Jackson during the busy tourist season. Jackson had the crowds that provided great
summer jobs for teens. And tips. Their parents would rent a house for five or six
girls, and they’d find jobs as waitresses, maids, and store clerks.
But Jackson also had flashing neon signs, bars, gambling, live music, silver dollars,
and celebrities. Margene was drawn in by what she remembered as the “big city”
sights and sounds, but the striking young woman would soon outshine it all.
At age 17, Margene started waiting tables at the Silver Spur Restaurant for Clyde
and Afton Larson. When she was 18 she managed to wrangle a job at the Silver
Dollar Bar as a daytime cocktail waitress. She told her mom she was working in the
restaurant. She didn’t know a thing about alcoholic beverages, couldn’t make change
properly, and gave away all her money that first summer. She was hooked.
Since the best bartenders and cocktail waitresses swore an oath not to repeat what
they were told by their patrons having too much to drink, we can only give you an
idea of what Margene saw and heard. True to the end, she took her best stories with
her.
The 1950s were the golden age of floorshows and comedy routines in Jackson. Most
were booked from Las Vegas for June through August, when the groups wanted to
escape the desert heat and bring their families to the mountains. The Sons of the
Golden West, Homer and Jethro, Rusty Draper – all big names of their day who loved
the friendly, relatively quiet life of Jackson. And they all loved Margene. Her fans
dubbed her “Goddess of the Firewater.” Then gambling was outlawed, the music
scene changed, and the big dance bands gave way to country stars.
Margene saved her money and moved to San Francisco when she was 20 to study
nursing, headed for a full-time career. Then she signed up for some ballroom
dancing lessons and her life took another turn from the ordinary – she fell in love
with her Italian dance instructor, Michele Restuccia, and they married and had baby
Jan. They moved back to the mountains, and eventually Margene went on with her
life with just young Jan. The two of them lived in Jackson off and on throughout Jan’s
childhood.

Most people who know Margene from her jobs in the bars of Jackson think of the
beautiful, sharp-witted cocktail waitress, first woman bartender, living in a world
not much bigger than the triangle formed by the Cowboy Bar, the Silver Dollar Bar,
and the old RJ Bar. But, like a server going from table to table, Margene bounced
around for much of her early life. Jackson was always home, but she spiraled out in
great circles. There was time spent in Florida raising 500 greyhounds, a marriage to
a golf pro in Rancho Mirage, dealing blackjack at Harrah’s in Lake Tahoe, even a job
at Prudhoe Bay when the oil boom was on. But she always came home.
In 1963, Margene turned Hollywood upside down when she became the mystery
woman on the arm of Henry Fonda. He was in the valley for the filming of Spencer’s
Mountain, Margene was working for Pappy Moore at the Open Range restaurant,
and she struck up a friendship with the actor. She sat with Fonda on the set of
Spencer’s Mountain, took him trout fishing on Jackson Lake, posed on the Snow King
chairlift with him, and one thing led to another. The Hollywood press asked many of
the locals who the stunning brunette was, but no one would reveal her name.
Margene kept their secrets, and they kept hers.
Margene traveled a bit with Fonda, trying to duck out of his spotlight, but soon
returned to Jackson. Fonda came back to Jackson to see her after the film’s premier,
and sometime in here Henry Fonda proposed to Margene. She declined. She had no
delusions about what life with a movie star would mean for her – no spontaneity,
keeping a check on her quick wit, no more independence. She said no to Henry, and
went to work at the Silver Dollar. One reminder of that time is a portrait of Margene
painted by world-renowned artist Archie Teater. Archie’s wife thought they could
make a big sale to Fonda, who was so enamored with Margene, but he didn’t take
their high-priced bait. Many years later the painting came up for sale in Teater’s
estate, and Margene bought it. In this pose, you can see why Fonda was so smitten.
Like Wilma Taylor and others who worked in Jackson’s bars and restaurants during
the summer, Margene kept moving out and back, winter and summer, frustrated
with the seasonal nature of work in a tourist town. When she had to spend a winter
in Jackson for Jan’s health, Steve Bartek put her on at the Wort’s Silver Dollar Bar as
the lone cocktail waitress. The Jackson economy was dead in the winter, but the
Wort was also a hotel so the bar stayed open. Margene made it work, made money,
and the next winter Wilma Taylor, Queen of the Silver Dollar, stayed in Jackson and
joined her. They became life-long friends.
Margene knew Willie Nelson when he was still clean cut and wearing cardigan
sweaters. She was on a first name basis with Willie and Waylon Jennings. She knew
Roy Clark, Jerry Jeff Walker, Doc Watson, and dozens of rising young stars. She was
friends with Bruce Hauser and the Sawmill Creek Band, and Asleep at the Wheel.
She loved Johnny Cash’s music. She loved her PT Cruiser because it had headroom
for her signature cowboy hat and she didn’t have to take it off to drive.

In 1989 Margene’s first grandson was born and she came back to Jackson for good.
During the Gulf War in 1991, Margene was a bartender at the Rancher Bar, and she
made each of her customers write a note to the U.S. troops before getting their
drink. She formed a regular women’s lunch group to introduce new women in town
to life in Jackson. She started a Secret Santa Christmas program for struggling
families. If that sounds too tame, she also slipped Mickeys to belligerent or rude
customers, she helped crack open an abandoned safe in the basement of the
Cowboy, and when she filled out a form that asked: Sex – M or F, she would cross
them both out and write Yes!
She was the only woman in the Coffee Club, a weekly breakfast gathering of old
timers that included former judges, senators, lawyers, mayors, and business leaders.
Of course the Goddess of the Firewater would be included.
In 1996 she met the love of her life, the man she’d spend the rest of her days and
nights with, Terry Ray. And mind you, the bar was already set pretty high. Margene
was working at the Silver Dollar and Terry owned a Western art gallery across the
street. They became friends, and soon Margene was selling as much art as Terry just
by talking up the gallery with her customers in the bar. Eventually, Terry convinced
her to come work in his West Lives On Gallery. It was a big change for a woman who
had pretty much survived on tips for her entire career, but she was a natural. She
knew art and she knew people, and the artists loved her. Terry and Margene became
partners in the art business, and in life.
One of the gallery’s signature artists, Ray McCarty, painted Margene’s portrait in
2017. His distinctive artwork adorns the Wort Hotel and the Silver Dollar Bar, as
well as high-end homes and offices in Las Vegas. A bit ironically, McCarty worked in
the neon sign business in Salt Lake City and Las Vegas in the 1950s, setting up many
of the early signs in Jackson that first drew Margene to town. Comparing the two
paintings of her – McCarty’s and Teater’s – you can easily see that her beauty didn’t
fade, but like a classic neon sign whose color grows richer and more sublime,
Margene just got better with age.
Please join Margene’s family – the love of her life Terry Ray, daughter Jan Case
(with husband Jeter Case), grandsons Taylor James Case (with wife Meghan Dever)
and Parker Alexander Case in a celebration of her life on Thursday, July 22, from
3:30 to 6:00 pm in the showroom of the Silver Dollar Bar. Margene was preceded in
death by her parents, Maxine and Lowell Jensen, and her brother Boyd and sister
Helen. She is survived by her sister Sheryl and brother Roni. In lieu of flowers,
please consider a donation to the Jackson Hole Historical Society and Museum in
Margene’s name. And don’t forget to tip your cocktail waitress.

To order memorial trees or send flowers to the family in memory of Margene Jensen, please visit our flower store.