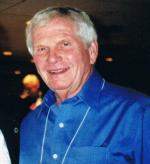 Max Racey died December 26, 2010, at St. John's Living Center in Jackson, Wy. He was 86. He was born September 14, 1924, to Walter and Fay Brannon Racey in Alva, Oklahoma. The Dust Bowl in the mid-thirties forced his father to abandon his meat market and move the family to California. Max graduated from Santa Ana Senior High School in 1942.

He joined the U.S. Marine Corps and served from March, 1943, to December, 1945. He participated in the campaigns of Guam, Morotai, Leyte, and Iwo Jima. He was wounded by enemy fire on Iwo Jima and spent two months in hospitals.

He graduated from Santa Ana Junior College in 1947. He received a B.S. degree in business administration from the University of Southern California in 1949. He was vice-president in charge of sales for the largest school photography firm on the west coast and later was Western Division sales manager for anational school photography company. For seven years he was a stock broker. He was director of two business colleges, one in Oregon and one in California.

Max retired to Bend, Oregon. As a volunteer at the High Desert Museum he gave lectures on birds of prey that featured life owls, hawks, eagles, vultures, and falcons. He enjoyed hunting and fishing. In Bend he met Fran Measom who was his companion for 18 years. They moved to Jackson in 1996.

They attended reunions of his Marine Corps unit (the Joint Assault Signal Company)in cities around the country. In 1998 they hosted the reunion, the best one, of course, in Jackson.

He is survived by Fran Measom and her family. No services are planned. Memorial contributions can be made to st. John's Living Center or the Senior Center of Jackson Hole.

To order memorial trees or send flowers to the family in memory of Max Racey, please visit our flower store.