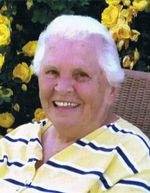 Millicent Evelyn (Millie) Alexander passed away June 2, 2010, at St. John's Living Center after a long battle with Alzheimers. Throughout her fight , she never lost her mischievous smile or the twinkle in her eyes.

Millie was born on October 14, 1922, in Sunrise, Wyoming to Frank and Rue Jane Tucker. The family moved to Cheyenne, Wyoming where she met and married her husband of 68 Years, George H. Alexander. They raised their five children there before moving to Jackson in 1966 where they lived except for a brief time in Riverton, Wyoming from 1978 to 1983.

Millie loved her family and friends and was always willing to have fun. She was a member of the Eastern Starand the Soroptomist. She adored spending time with her grandchildren and great grandchildren. We are forever greatful to the entire staff and volunteers of St. John's Living Center and Dr. Hayse for her care.

She preceded in death by her parents, her brothers Tommy, Ralph and Frank Tucker and a sister Alice Bartlett.

In lieu of flowers, donations would be wonderful to St. John's Living Center or the Alzheimers Association.

To order memorial trees or send flowers to the family in memory of Millicent Alexander, please visit our flower store.