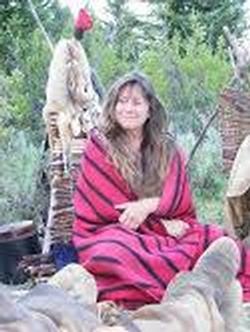 Raylene married Richard H.L. Ashburn of Jackson Hole, WY in 1970. She was a talented painter of portraits and landscapes, winning many awards, and was invited to exhibit her work at the MGM Grand in Las Vegas. She was an artist in every way - eccentric and unique.

Raylene was a respected part of the American Mountain Man association for over 30-years. At their annual Rendezvous at wilderness sites in the Rockies, her camp and meals attracted large gatherings of storytellers, poets and musicians. When she began setting up her tipi, members would gather around her to learn the old ways.

She earned the name Butterfly Woman by her fellow mountain men and women for her craft in tanning hides, transitioning the animals' life into something beautiful and spiritual. Her son-in-law, Richard King, recounted the time they trapped a beaver. He was having a slow time carefully skinning the hide with his knife when Raylene handed him a old Native American black obsidian scraping tool from her pocket. And showed him a much quicker and more efficient way. Growing up, her daughter, Tamara, didn't think she would ever get a date with her mother always out in the front yard skinning elk and antelope.

Bridgett Mullen and Dr. Michel Stern recalled the day Bridget's sister, Diane, visited from San Francisco. They took a walk with their dog down Porcupine Creek past the Ashburn's house, when Diane looked over and asked, "What is that woman doing?" Bridget said, "I don't know. Let's go ask her." So, they walked over and found Raylene skinning a bear. Bridget had just moved to Jackson and her sister soon began wondering where she'd moved to, on the edge of the frontier.

Raylene was a hell of a shot. Using black powder rifles, she regularly won contests against sharp shooting men. She was an incredibly strong woman, physically and spiritually. And was always willing to jump in when things got tough. That never changed throughout her life.

Raylene was an avid naturalist. She could name every tree, shrub and plant in the valley. Hiking with her was an education in natural healing plants and herbs. Being family or a friend of hers was to enjoy continuous gifts of the most beautiful flower arrangements.

Raylene had a deep understanding of people and a talent for keeping her family and loved ones feel connected during hard times. She was an earnest, gracious, cheerful, sentimental, and open minded person. And she was a generous, wonderful wife and mother.

Raylene is survived by her beloved husband, Richard H. L. Ashburn; her son Richard R. Ashburn and his wife, Andrea Ashburn of Jackson, WY; and her daughter, Tamara L. Ashburn King and her husband Richard King IV of Jackson Hole, WY. She is also survived by her beloved father, Raymond E. Lewis of Lander WY, with whom she was very close. Raylene was preceded in death by her brother, Keith Lewis and her mother, Darlene Lewis.

The family wishes to thank all their friends who provided so much support, compassion, prayers and love during her final fight.

The family will have a small private ceremony with no public funeral.

Toward the end of her life, Raylene expressed her life lesson - "Know self from non-self". She passed surrounded by family, in no pain with grace and dignity.

A poem her daughter wrote as a teenager, seems appropriate for The Butterfly Woman:

"Oh, butterflies of my heart do not be held down, but fly to the sky and color this ground. Oh, you flowers of my eyes, keep the life of this world. Let not winter settle and keep your petals uncurdled.

Keep thus believing in the simple and true. Keep thus knowing the many from the few. Keep holding to the stars as if the moon had wings.

And let this moment be free from all hurtful things."

To order memorial trees or send flowers to the family in memory of Raylene Ashburn, please visit our flower store.