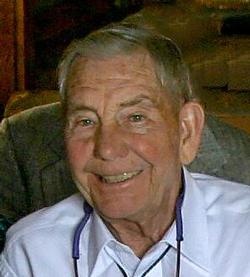 Robert Earl Bressler, 89, passed away on June 26th at St. John's Living Center in Jackson. Bob was born in Ashton, Idaho on April 8th 1925. Bob's family; his father Lyle, mother Lucille, and his five brothers and two sisters, moved to Jackson Hole when he was 7. Bob enjoyed a wonderful childhood, growing up living in Grand Teton National Park where his father was employed by the Park Service. Bob and his siblings developed a keen love for the outdoors, hiking and climbing all over the Park and surrounding areas. He also developed his lifelong love of fly fishing. Bob had many jobs around Jackson Hole during his school years including being a bellboy at the Wort Hotel, a busboy at Jenny Lake Lodge, and a fire lookout on Signal Mountain. After graduating from high school in Jackson, Bob attended college at the University of Wyoming and the University of Texas where he received a bachelor's degree in business administration. Bob served his country in the Navy at the end of WWII. Bob spent much of his two years in the Navy stationed in the Philippines. Bob started his working career in Casper, WY, working for True Oil Company as an accountant. While in Casper, he met Dorothy Marie Wilson, who on July 3, 1949 became his beloved wife. Bob and Dot were married at the Chapel of the Transfiguration in Teton Park. The young couple had the spirit of adventure and soon moved to Juneau, Alaska, where he worked for the Alaska Highway Commission helping manage the building of the Alaska Highway. Their son Stephen was born during their stay in Alaska. Bob and family returned to the lower 48 in 1958, settling in the Los Angeles, California area, where he worked for the Paper-Mate Pen Company. He spent most of his career there as manager of production planning until he retired in 1982. Bob and Dot spent a wonderful extended retirement, much of it enjoying the RV lifestyle. They owned several motorhomes over the years, traveling all over the country, but spending most their time in Wyoming, Arizona and Oregon. Bob always wanted to find places with good fishing, either fly fishing for trout or fishing for salmon that he had developed a love for while in Alaska. In their later years Bob and Dot had settled into spending the summers at Star Valley Ranch, near Thayne, Wyoming and winters at a home they owned in Mesa, Arizona. After 57 years of happy marriage, Bob was preceded in death by Dot, who passed away in 2006. Bob was fortunate enough to meet Lois Barber a couple years later. They became good friends and they spent his final years together.

Bob is survived by his son Stephen and daughter-in-law Helen, and by his youngest brother Dell and by numerous nieces and nephews. He is predeceased by his brothers, Don, Roy, Vern and Jack and his two sisters May and Maxine.

To order memorial trees or send flowers to the family in memory of Robert Bressler, please visit our flower store.