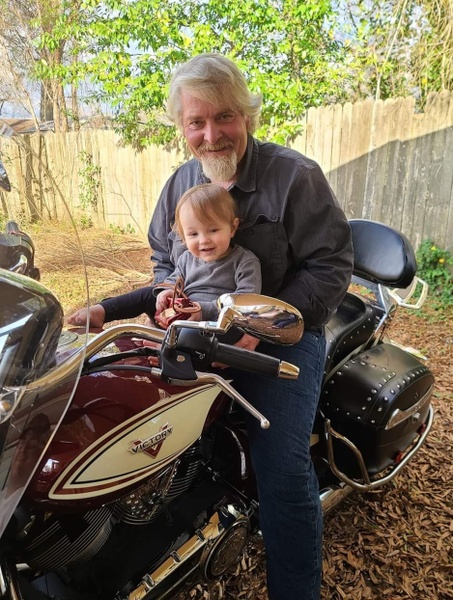 On Sunday, August 7th, 2022, Roger Allen Davis Jr. of Gildford, MT and middle GA died in a motorcycle accident on the Grand Teton Pass in Wyoming off SR 22 at the age of 56. He was on his way home to Georgia at the time.

He married his boyhood sweetheart, Karen Hoffman, on January 18th, 1988, and together they had 9 children.

He loved the western US, wilderness, a good campfire, and sharing stories with anyone and everyone. He was nomadic at heart and felt most like himself while out on his beloved Victory 106. His family will remember him best as the man that could be happy with nothing, and could make others happy by being in his presence. Roger roamed the country, but made great effort to see his children and grandchildren. He was a man of many and varied talents, he was a brilliant conversationalist, (a great BS’er, he would say), he had a great sense of humor, and a terrific singing voice. His favorite quotes in his later life were from songs by Zakk Wylde:  “Collected memories, all that’s in the end” & “All is black and white, wouldn’t change even if I could”. If you knew Roger, you’d know that these words summed up his life. He never had a desire to grow old. He wanted to burn hot and fast, and in that, he succeeded. “I was here- I did it” is likely what his last thoughts were. You will be dearly missed by your friends and family. May your adventures never end, Roger Davis.

Roger was preceded in death by his son Jethro, his brother Aaron, his father Roger Sr, and his mother Diane.

As per his wishes, his headstone will be placed next to his father’s and brother’s at the Sheridan Wyoming Municipal Cemetery:

To order memorial trees or send flowers to the family in memory of Roger Allen Davis, Jr., please visit our flower store.