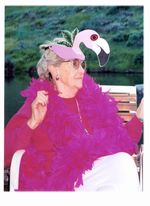 Ruth, affectionately known as "Mrs. Goldberg", was born in Niagara Falls, NY on May 18, 1921, to George and Evelyn Lavers, the sixth of a family of 10 children. On August 12, 1938, she married Jack Beckett, of Niagara Falls. The couple moved to Youngstown, NY, where they raised their three sons and one daughter in a cottage on the shores of Lake Ontario.

Ruth was a waitress at several prominent restaurants for many years, and her sense of humor and zany antics were greatly enjoyed and appreciated by her customers.

After raising their family and retiring, Ruth and Jack moved to Jackson, WY in 1979. She then devoted her time to her family, friends and gardening. For twenty-six years, family, locals and visitors alike delighted in the variety of plants and flowers in her beautiful garden behind her Pearl Street home. Several years ago, Ruth and her garden were featured on Home and Garden TV, which was a great source of pride and satisfaction to her. Ruth was an excellent seamstress and cook. Many birthdays and special occasions were made more memorable by the beautifully decorated cakes that she baked. She loved spending time with her grandchildren, and they had many marathons of playing "Trouble" and other games in her kitchen. She also worked part-time for the Jackson Hole News for seven years. Ruth loved to shop, and she was a familiar face at K-Mart, Browse N Buy, Orville's, Pamida and Forget Me Not, where she made many friends. She loved having coffee at McDonald's.

Ruth moved to Pioneer Homestead apartments in October, 2005, leaving her beloved garden to the care of others. In April of 2009, she moved to River Rock Lodge, where a Memory Garden willl be established in her name.

She was preceded in death by her husband, Jack; her parents; seven siblings; and her daughter- in-law, Helen Beckett.

A celebration of Ruth's life was held Thursday, August 27, at River Rock Lodge, where she resided at the time of her death. Cremation has taken place and her ashes have been scattered by her family. Memorial donations may be made to St. John's Medical Center and Living Center, Jackson, WY; or, in lieu of cut flowers, potted plants may be donated to the River Rock Lodge for her Memory Garden.

Condolences may be sent to: www.valleymortuaryjackson.com

To order memorial trees or send flowers to the family in memory of Ruth Beckett, please visit our flower store.