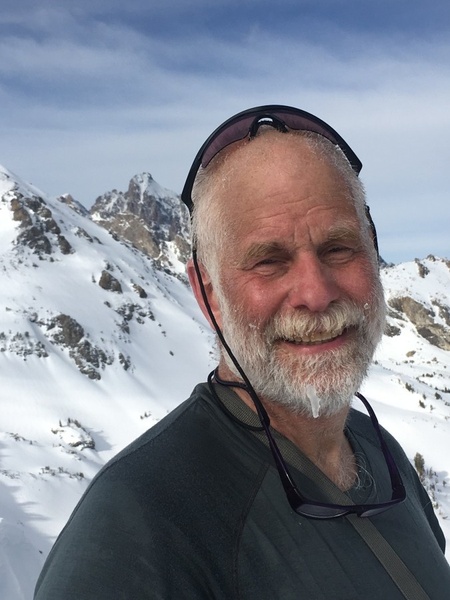 Jackson resident Sam Benton Collins died Monday, July 9 in a motorcycling accident on Pine Creek Pass in Idaho, following a road trip earlier in the day through Tin Cup Pass, Bear Lake county, Star Valley and the “Round the Block” loop home.  His KTM Super D GT motorcycle lost traction on a tight curve just west of the summit, slid into gravel and lost control. Sam was thrown from the bike and died from trauma upon impact. His body was found Thursday evening, July 12 through the stellar efforts of law enforcement on both sides of the state line.  The family extends their profound appreciation to the Idaho and Wyoming Highway Patrols, Teton County (WY), Bonneville County (ID) and Bear Lake County (ID) Sheriff’s offices and to those offices’ Search and Rescue Teams for their support and hard work.

The family provided the following:

Sam always said to his family and friends: “Find something you love and work hard at it!”  That attitude captured his life and activities from his youth through to his retirement. Sam was born in Seattle, Washington and spent the first two decades of his life in the mountains of western Washington and the waters of British Columbia’s Georgia Strait with lengthy forays to Europe at six and Mexico City at 13 due to his parents’ academic sabbaticals.  He worked summers as a B.C. logger to put himself through Whitman College in Walla Walla, WA, where he met his wife of nearly 37 years Karen Rockey.

A sense of exploration took him to the east coast post-graduation where he worked for Bell Labs in New Jersey and attended Columbia University’s Graduate School of Arts and Sciences and completed (but did not defend) his dissertation in Theoretical Chemistry, receiving a Master of Science degree.  He took his math skills to Wall Street where he worked for several major financial services firms, creating computer models of the firms’ bond market risk. Sam and his wife lived in New York City for 35 years, were avid supporters of classical and choral music programs and theater, and introduced their three children to the wonders of a busy, culturally and ethnically diverse community … all the while living in the small, family neighborhood of Brooklyn Heights.

Sam was an avid sportsman who participated in the road bicycle organization American Randonneurs Association both in the metro NYC area and in Montana.  He was thrilled to take part in four Paris-Brest-Paris, two Canadian Rockies and one Alaska 1200K/90 hour races over the past 15 years. He learned to snowboard at age 49, came to Jackson Hole at age 52 and could not wait to retire here.  Those who have met Sam on the Mountain or guided him in the backcountry know that deep powder, steep slopes and like-minded boarders were his church and his community, keeping him in the mountains more than 120 days every winter. Sam finally got his formal driver’s license at age 60, traded his road bikes in for motorcycles the summer of 2017 and enjoyed touring roads in Wyoming, Idaho and Colorado.

Sam is survived by his three wonderful children (and snowboard compatriots) Kirsten, Brenden and Stephanie Collins of Chicago and Jackson, WY; his wife Karen Rockey; and his brother Peter Collins of Heemstede, Holland, all of whom will miss him deeply. The family asks that any donations on his behalf be made to Jackson Hole Mountain Resort Ski Patrol – whose service he had reason to appreciate on his more adventurous days –  or to Teton County Search and Rescue.

To order memorial trees or send flowers to the family in memory of Sam Collins, please visit our flower store.