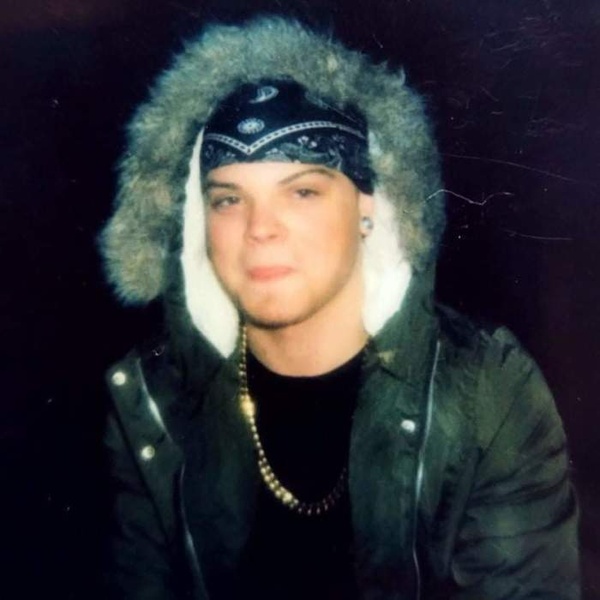 Scott Michael Stewart (Mikey) was born bright and early on February 13th, 2003. Michael came into this world strong and with a huge appetite for milk always carrying two bottles at a time. He was so strong that it gained him the childhood nickname Moose.

Mikey lived his last few months of life traveling between his sister's home in Wilson WY and his beloved girlfriend's home in Pocatello ID.
Michael was a man of few words, but the words he did speak, rang truth, strength and sometimes a clever, yet devastating roast. You were special to him if he shared his thoughts with you.


Michael's work ethic was nothing short from inspirational. With just one leg, he was able to quickly and efficiently do his job better than most. He enjoyed working with his co-workers at Three Canyons Restaurant in Thayne WY and often would tell his sister that he liked the ones who understood how to "speak Mikey", as the family likes to call it.


Michael was happiest when with his family, his best friend Henry Thomson, good friend Olivaa Binns and especially his girlfriend Jordyn, who could pull him out of his shell no matter what and could turn the hard looking teen into a soft marshmallow with just one glance. Michael enjoyed writing music and was a very real lyricist. His lyrics about growing up in a hard situation and living with trauma from his past, could bring anyone to tears. He had an amazing ability to reach others on a deeply emotional level. Writing was the breakthrough for the selective mute to finally vocalize all the pain and anger he had been carrying around from surviving his abusive father. His music was a positive outlet during his chemotherapy treatments to help him push through the painful side effects from the medicine. He was gifted professional studio equipment from the Make a Wish Organization because of his great talent and passion of self expression through his music.


Michael was involved in football and had recently discovered a love for pole vaulting after joining the track team at Star Valley High School and said that was the happiest time of his life up to that point. While Michael was healthy,  you could find him in the gym or running up a mountain, he had a strict work out of 1000 sit-ups. push-ups and as many pull ups as he could handle. 2018 Michael was at his peak fitness and while pole vaulting he was injured. For months he dealt with the pain thinking it was just a pulled muscle. In September of 2018 Michael was diagnosed with osteosarcoma. A bone cancer that had taken over his ability to use his left leg. Though he underwent chemotherapy it was necessary to remove his leg.  Michael lost his leg, but gained strength no amount of workouts could accomplish. He inspired many of his classmates in gym class to challenge themselves to do activities using only one leg as well as Michael did. Not once did Michael complain, he sometimes would even push his siblings in their stroller from the car to his appointments at Primary Children's hospital. His baby siblings loved Michael,s wheel chair rides around the house.


Although cancer took away a lot of Michael's experience to be a teenager he did learn to drive with the help of his sister, he bought himself a land rover SUV at 18, had a personalized graduation ceremony and got a few months of wreaking havoc with his new found freedom that, on one hand worried his loved ones, also was celebrated for the fact he was able to live a normal teenage life. In May of 2021 Michael got a grim terminal diagnosis after 6 moths of being cancer free. He was given 8 weeks but surpassed it to no ones surprise. In the end of his life he got the chance to fly in a personal piloted airplane for the first time, he also got the opportunity to go deep sea fishing on the cost of Oregon. He spent his time with his sister, girlfriend and close friends playing a lot of poker and cards against humanity. On the morning of August 6th, Michael was hospitalized. The brain tumor that had shown up weeks before had started to take away our Michael. Michael had a full room with lots of people who loved him and lots of laughter remembering him and never did he not have someone holding his hand. Michael took his last breath close to his Mom and holding his girlfriend and sister's hand on the morning of August 7th. After fighting nearly three brutally difficult years of cancer, Michael was finally at peace. Michael is survived by his mother Vanessa Swenson, Brothers, Tray Stewart, Kyle Stewart, Tyson Stewart, Zander Fredderick, and sisters, Tess Stewart, Abby Fredderick, Rhannie Fredderick, his close friends Henry, Olivia, and his girlfriend Jordyn. There is also a huge army at Three Canyons Restaurant and an incredibly large extended family. He will be deeply deeply missed by everyone who knew him and forever inspired by his example.

To order memorial trees or send flowers to the family in memory of Scott Stewart, please visit our flower store.