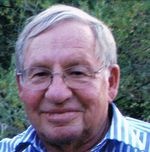 Theodore DeWayne (Ted) Benson was born to Jesse and Mabel Benson in Moorcroft, Wyoming on April 29, 1931 and died at 78 at his home in South Park, Jackson, Wyoming March 1, 2010. Ted's Family moved to Jackson when he was less than a year old and he grew up hunting, fly fishing, trapping, skiing and cowboying. He attended local schools, graduating from Jackson Wilson High School in 1949. After his first semester at the University of Wyoming, he married Kay Willard and she worked his way through college, where he lettered all three years on the ski team. In 1953 he graduated with a bachelor's degree in Business Administration,and was commissioned a 2nd Lieutenant of lnfantry. His first duty assignment was Fort Benning, Georgia where he discovered the Army had airplanes. He proceeded immediately to flight school and throughout his 20 plus years as an Army officer flying was his favorite part. During his first tour in Germany as a forward artillery observer he painted the Wyoming cowboy symbol in brown and gold on the hubcaps of his airplane. He completed 4 tours of duty overseas, two in Germany, one in Vietnam and one in Korea. He fathered three daughters, Brett, Shown and Lauren, and one son, Ted II, moved 29 times and retired in michigan as a Lt. Col. in 1976. During his service he commanded an aircraft maintenance Company in Germany, a Rotary instructors Flight at the Aviation School in Alabama, an aviation platoon in Vietnam and the Pusan Depot in Korea. He was awarded The Bronze Star, Meritorious Service Medal with 1st Oak Leaf Cluster, Air Medal with 4th Oak Leaf Cluster and the Army commendation Medal.

After Ted retired from the Army he and his family returned to Jackson for a visit, the mountains were pretty and the fishing was good so he built a house and stayed. He was home. He hooked up with Gene and Darrell Hoffman, childhood friends, and obtained his Real Estate License and apprenticed as a Real Estate Appraiser. He worked with the Hoffmans for 16 years. In 1993 he and Kay opened their own office where Ted continued to appraise untill his retirement in 2009. Along with flying, his favorite things were family, fly fishing, and photography.

Ted is survived by his wife of 60 years, Kay, four children, four grandchildren and on sister, Vivian Williams.

To order memorial trees or send flowers to the family in memory of Theodore Benson, please visit our flower store.