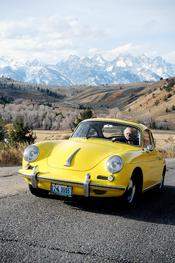 Tim was a lifelong resident of Wyoming, growing up in Casper where he was in the first graduating class of Kelly Walsh High School. After attending Casper College, he joined the Army and then went to college at University of Wyoming, graduating with a B.A in History and Public Administration. He lived and worked in Laramie for 12 years, where he owned a construction company and worked as a building inspector for the City of Laramie. In 1986, he moved to Jackson and served as a Building Inspector and Building Official for 20 years with the Town of Jackson and then returned to construction management. Tim had a lifelong affair with his '64 Porsche 356 SC and had support to rebuild his car from his friend, Bill Doyle of Rennwagen Motors. When Bill invited Tim to work on other Porsches, Tim finally realized his dream job.

Family was the center of Tim's life. He loved watching his daughters and granddaughters grow. Family also included many wonderful friends that he held close over the years, some of them from grade school. When he was asked for help, he gave it freely. Jackson Hole, where he first visited with his family as a young boy, was a special place for Tim. When the Jackson Hole Ski area opened, he returned to become an avid, expert skier. His favorite sports team was always the underdog, rooting for the Cardinals, Rockies, Phillies and Red Sox until they won. Many neighbors in east Jackson knew Tim from his frequent walks with his dogs, Sasha and Meg, and his willingness to listen and tell stories. He was always willing to tell jokes at his own expense. He loved animals and was dedicated to adopting and nurturing rescue dogs.

His years of public service were marked by a desire to give individual attention and support in finding solutions and most of all to be fair. He also believed in giving back to the community and volunteered his time to many organizations, including the Jackson Hole Museum. As a lifelong learner himself, Tim believed children needed support to succeed and thrive and he volunteered with youth sports, The Learning Center and JH debate team, as well as offering his construction skills for children's programs. Despite his lack of campaigning, he was successful in running for public office and came in fourth in the primary election for town council. Tim and his wife, Anita, recently celebrated 30 years of marriage.

Tim is survived by his wife, Anita; his daughters, Tracy, Shannon, Marisa and partner Jordan; granddaughters, Keileigh and fiancAC. Shane, Jordyne, and Lindsey and great- granddaughter, Tayian. He is also survived by his family in Casper- his parents, Pat and Betty, brothers, Mike and Terry and their wives, Kathy and Debbie, and sister Cathy Schulte and her husband, Ken of Casper; and many nieces and nephews. Memorial services will be held at 11:00 a.m. on Wednesday, March 9 at Valley Mortuary on 950 Alpine Lane in Jackson. Should friends desire, donations may be made to an college fund for Tim's grandchildren and children to: Tim Sullivan at First Interstate Bank, 842 W. Broadway, P.O.Box 11095 Jackson, WY 83002

To order memorial trees or send flowers to the family in memory of Timothy Sullivan, please visit our flower store.