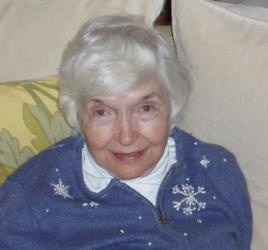 Gini passed away peacefully with her daughter by her side at the St. John's Living Center on January 8, 2015.

Gini was born in Ponca City, Oklahoma on June 25, 1931, to Gladys Price Helm and Carson Helm. Her parents divorced when she was a small child. At age 14 her mother married Edward Trunk and they relocated to Cleveland, Ohio. Ed would remain her loving father for the rest of his life.

Gini graduated from Lakewood High School in Lakewood, Ohio, and then from the University of Ohio, in Athens, Ohio. She was a member of Alpha Xi Delta sorority and remained active in that organization until she was in her late 70's.

While teaching school in Akron, Ohio, Gini met her husband of 55 years, Kenneth McInerney, an executive with Glidden Paint/SCM Corporation. Gini retired from teaching when their first of two daughters was born, and was to remain a home-maker.

Although the Cleveland area was always home, they spent several years in both West Bloomfield, Michigan and Paris, France, settling in Bay Village, Ohio in 1975. When Ken retired in the 1990's, the couple relocated to DeBary, Florida, where they enjoyed a life of golf, bridge and friends. A frequent visitor for 35 years, Gini moved to Jackson, Wyoming, after Ken's death in 2011, to be closer to her daughter and her family. She was a resident of River Rock, and then the St. John's Living Center.

A private memorial will be held by the family.

The family would like to express their sincere gratitude to Dr. Jim Little Jr. and the entire St. John's Living Center staff for the expert and loving care they provided Gini.

Donations can be made to The St. John's Living Center in Jackson, Wyoming.

To order memorial trees or send flowers to the family in memory of Virginia McInerney, please visit our flower store.