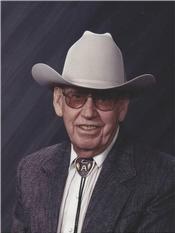 Warren M. Robertson died October 7, 2013 in Worland, Wyoming. He was 90 years old. The following is provided by his family.

Warren M. Robertson was born January 31, 1923 to James M. Robertson and Tabitha (Beth) Ricks Robertson in Jackson, Wyoming. His grandparents were some of the earliest settlers to the Jackson Hole valley, homesteading in the South Park area in 1889.

When Warren was about eight years old, his parents lost their ranch because of the Depression. The family moved to town (Jackson, WY) where Warren and his brother Orland did odd jobs around town using the old work team. Warren was around horses and cattle from a young age and spent his high school years boarding out as a ranch hand and working for Uncle George Wilson.

From the time of his graduation from high school in 1942, Warren was a ranch hand for several ranchers in the area, including the Mosley Land and Cattle Company and the Hansens. In the spring of 1944, he enlisted in the Navy. He was first sent to Farragut, Idaho for basic training, then to the Range Finder and Spotting School in southern California. When his father became ill, Warren was allowed to return home for family leave, but this cost him his place in Spotting School. He was subsequently sent to Hawaii for six months, then on to Saipan for 10 A½ months where he sandblasted tanks and other equipment to prepare them for return to the battlefield. He worked alone at this job, but he said this was a good thing since he never was very good at taking orders. He was honorably discharged on January 23rd, 1946 and returned home to Jackson.

In the fall of 1946 Warren decided that he wanted to see how they cowboyed down south so he went to Patagonia, Arizona where he spent the winter breaking colts. He enjoyed working alongside these southern cowboys and said he learned a lot during this time. Before there was anyone called a "horse whisperer," Warren patiently worked with colts to engender trust, establishing a lifelong pattern of firm and steady guidance for animals and people.

Warren was longtime friends with the Hardeman family who homesteaded north of Kelly, Wyoming, especially sons Earl and Howdy. He knew their younger sister, Helen, from the time she was a young girl. Warren asked Helen to her first square dance when she was seventeen; they fell in love and married on March 1, 1950. Theirs was a genuine love story that lasted more than 63 years.

Warren and Helen's family arrived quickly; Irene was born in May of 1951, Gene in January of 1953, and Lois in March of 1954. Having children so closely spaced was challenging but lots of fun. Warren taught his kids about work at an early age; Gene cowboyed and everyone helped with haying.

The summer of 1950, Warren and Helen went to work for the Forest Service at the Goosewing Ranch. He was an assistant ranger and helped check the ranges. Outside his years in the military, this was the only job he ever had that did not involve working with horses and cattle. Later that year, he went to work as ranch foreman for Bruce Porter, who owned the Jackson Hole Hereford Ranch south of town. Porter later appointed Warren ranch manager. With the help of his family, the Porter family, and good hired men (Warren May, Gene Moses, and his own son, Gene), Warren built a good herd of Hereford cattle and had one of the best haying operations in the valley. Helen was an essential part of his work and his partner in every endeavor. Warren and Helen worked at the Jackson Hole Hereford Ranch for more than four decades before retiring in 1995.

Warren was capable in so many ways. The design for beaver slides, one of which still sits at the corner of High School Road, is thought to have originally come from Montana. Warren adapted the design to allow the loads of hay pulled upward into the air to be dumped into a sided hay crib. Warren displayed great ingenuity to retrofit old vehicle wrecks to make this haying equipment.

In the 1950's, each Saturday night of the summer found the entire family in Wilson at the old rodeo arena that was located behind the Stagecoach Bar. Warren did both calf roping and team roping, often with his son, Gene. For many years, he worked as one of the pick-up men, riding alongside the bronc riders to help them dismount when their eight seconds were up. This was always a pretty "western proposition" and he experienced his fair share of injuries, including a broken neck and a spread pelvis. Ranch life was tough; on another occasion a bull gored him. Through all these times, he was uncomplaining and patient, getting back to the work as soon as he was able.

October was his favorite month; most of the ranch work was done for the fall. It was also a time when he usually did several ten-day stints working as a hunting guide for his brother-in-law and sister-in law, Keith and Marie Stilson, up the Gros Ventre.

Warren and Helen built their own house in Wilson on Main Street, finishing it in 1977. Except for the framing and exterior, they did the interior work themselves with the help of brother Howdy Hardeman.

Beginning in the 1970's Warren and Helen joined the exodus south to warmer weather during the winter months. They had both motor homes and fifth wheels, travelling mainly in Arizona. Each year they stayed a bit longer. When they were home in the winter, they enjoyed snowmobiling with friends and visited many back country areas, including Yellowstone, Togwotee, and the Gros Ventre.

In June of 1997 Warren and Helen moved from Jackson to Stevensville, Montana. After a few years there, they made several other moves before settling in Worland, Wyoming in 2005. This put them near son Gene, his wife Kris, and the ranch life they so loved.

Since the spring of 2012, caregivers have assisted Helen in caring for Warren. With the help of these wonderful ladies he was able to remain at home beside his loving wife. Not long ago one of the caregivers was talking with Warren about his life and asked, "Warren, how old do you think you are?" He thought a minute and replied, "I think I'm about 35." She said, "No, you're 90." Warren, always hesitating a moment before he spoke, said, "Well, that explains a lot of things!" This is an example of the sweet spirit he maintained as he faced the challenges of growing older. Warren was a true cowboy in every good sense of the word: devoted to his family, honest, hard-working, a diligent and careful caretaker of the animals entrusted to his care, with a quiet faith in a loving God. We, his family, have all been deeply loved by this kind and generous man.

He is preceded in death by his parents, sister Glenna Bowthorpe and brother Orland Robertson. He is survived by the love of his life, the former Helen Hardeman, children Irene (Rich) Steeg of Wilson, Wyoming, Gene (Kris Owen) Robertson of Hyattville, Wyoming, Lois (John) Shaffer of Canton, Pennsylvania, seven grandchildren and eight great grandchildren.

To order memorial trees or send flowers to the family in memory of Warren Robertson, please visit our flower store.