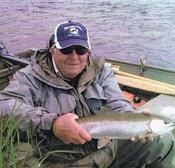 Jackson Hole resident, William "Bill" Patrick Colglazier died on September 4, 2013 at home after a long illness. He was born on October 2, 1933 in Indianapolis, Indiana to Dorothy Doherty Colglazier and Hobert Colglazier. He attended St. Joan of Arc Grammar School and Cathedral High School in Indianapolis and graduated from St. Edward's University in Austin, Texas. He worked for 31 years for the Linde Division of Union Carbide, retiring in 1990.

Bill was transferred to many states. In 1974, he moved to the Bay Area where he was a Regional Sales and Marketing Manager. At this time he met his second wife, Carol Rouse Carr, and they lived in Marin County, CA joining his five children with Carol's two. In 1991, Bill and his wife moved to Jackson Hole; they lived in both Wilson and Jackson, Wyoming.

Bill was a great fly fisherman and in later years spent every summer at Henry's Fork, ID in his little trailer. He had many friends there, many of whom he taught about the finer art of his beloved sport. Wading a stream not only gave him an intense feeling of peace, but a challenge as well. He fished in New Zealand, Ireland, Argentina as well as numerous beautiful spots around the country. However, the streams of Jackson Hole and Henry's Fork gave him the greatest joy.

Bill was a member of Our Lady of the Mountains Catholic Church in Jackson Hole, where he served as a member of the Board of Trustees for 10 years. During this time he helped to manage the renovation of Sacred Heart Chapel in Grand Teton Park and the renovation of Our Lady of the Mountains. He served on the Board of Directors of Trout Unlimited and was a fourth degree Knight of Columbus.

His view of Heaven would contain quiet streams with perfect water full of fish, all the correct flies in his fly box, beautiful mountains, much wildlife, family members, friends, and a drink in an Irish pub. He had a great sense of humor and could remember jokes, reciting them at just the right occasion. Bill could quickly get to the heart of the situation, was strong in character, persevered in any situation and showed great wisdom in solving problems. Most of all, he loved his family and his family loved him.

Besides his wife, Carol, he is survived by six children: Bill Jr., Susan Young, Tom, Anna San Miguel, Tony Carr, and Dennis Carr. He also leaves behind 9 grandchildren and one great grandchild, his sister and brother in law: Dr. Hans and Margaret Geisler, and numerous nieces and nephews. His son Ron preceded him in death in 2010. Services were held at Our Lady of the Mountains Catholic Church on September 6 and 7. A Memorial Mass and celebration of his life will also be held in Sonoma, CA on September 30.

To order memorial trees or send flowers to the family in memory of William Colglazier, please visit our flower store.